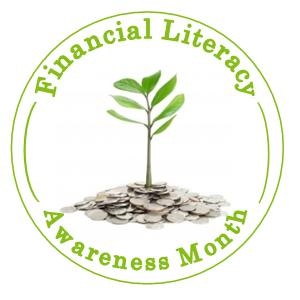 In honor of National Financial Literacy Awareness Month, our friend Shannon from The Heavy Purse has put together a celebration of sorts.  Part of that celebration is to host a carnival of NFLAM posts in order to help awaken the public to the importance of financial literacy by sharing important info and stories from those on the road to financial freedom.  Go here to get the scoop and get links to all of the posts for this informative and education carnival.

Why Financial Literacy Matters to The Frugal Farmer family:

I suppose our story of how we made such a mess of our finances starts when we were children.  My husband and I both came from broken homes.  Money was a problem for our parents, both before and after their divorces.  Poor money management on the part of one or both of our parents’ caused financial despair during the marriages, and having even less money for our mothers to manage after the divorces caused more financial troubles.  For my family personally, I can say that we were “dirt poor”.   In the years following the divorce, my mom worked to raise 3 kids on the $300 a month child support that the judge deemed reasonable, which my dad faithfully paid every month.  The house payment was $250, so that left $50 each month to cover food, utilities, clothing and the works.  We went on welfare as my mom learned to drive a car and teach herself to type so that she could eventually qualify for a job.  Eventually, she landed work and things lightened up a bit, but those days of dirt poor were ingrained in my memory.  The days of being teased at school for my $2 canvas tennis shoes and thrift store jeans were burned deep within my soul, and at some point during my teen years, I vowed that I would never again be looked down upon for not having what others enjoyed so casually, as if it were the norm to have Nike tennis shoes and Jordache jeans.  When I first started working at 15, I spent every single dime on clothing.  At 16, I got my first department store credit card, and so the cycle began.  I saw my credit card as a way to boost my goals of being one of the Joneses.  What would follow was a 25-year journey to keep up, or surpass, those around me.  Never again would I hear “No.  We can’t afford it”.   Little did I know or understand at that point, but my need to have things was really about a whole lot more than not having enough money.

My husband went the opposite route with his money lessons from childhood; he hoarded like crazy.  When I met Rick he was 25, living at home, had just moved from a $6 an hour job to a $12 an hour job and had over $20,000 in the bank.  Soon afterward, he took $6,000 out for a down payment on a new truck.  We married less than a year later, and as Rick’s home life with an abusive father left him fearful of confrontation, he didn’t argue when I said I wanted to manage the family finances.  After all, I reasoned, I work in banking.  I know what to do.  I did know what to do.  The problem was that my pursuit to “have it all” trumped my knowledge and common sense when it came to managing our money.  I was using money and all that it bought to fill old voids and heal old hurts.  Slowly – very slowly – I was learning that those hurts needed to be healed from the inside out, but since I still wasn’t budgeting or tracking our spending, things were still a mess for us financially.  After my layoff in 2003, we decided I would stay home with the kids, leaving us with even less money to manage poorly.

Our one-income went away when Rick was laid off in the beginning of 2010, but it still wasn’t enough to keep me from thinking I could buy my way to happiness.  If the money went in, I found a place for it to go out.  Fear of not having enough stuff battled in my mind with fear of having debt, and we went through cycle after cycle of paying off the cards and charging them up again.

In October of 2012, after we traded in our suburbia mini-mansion for a small hobby farm and charged a $4,600 snow plow that we “needed” for the long driveway, something finally – FINALLY – clicked.  We knew that we were in WAY too deep.  Our debt to income ratio (monthly debt payments divided by gross monthly income) was hovering around 65%.  For those not in the know, mortgage companies generally only allow a 45% maximum debt to income ratio when approving someone for a mortgage loan.

On January 1st of this year, we made a commitment, for the sake of our marriage and our children that we were going to get out of debt.  Given our financial situation, we knew that this journey wouldn’t be easy, but we also knew that the ramifications of not getting our finances in order could not only devastate our children, but could destroy our marriage as well.  We also knew that as a family, we deserved a better life than to just slave away to pay debts forever.

We’re only 3.5 months into our journey to debt free at this point, but I can honestly say that our life has changed dramatically.  By cutting expenses down to the bare bones, we’ve paid down over $2,400 on our total debt, our debt-to-income ratio is down to 61%, and we now have $2,000 in savings as an emergency fund.

We ‘heart’ National Financial Literacy Awareness Month because it’s so very important to us that people no longer suffer from financial problems, most of which are so easily avoided in the first place with proper education and training.

Things are slow going for us right now, but we’re focusing on the fact that they’re headed in the right direction.  I would say, however, that the most important victory we’ve achieved is that because we’ve put a budget and a list of goals in place, we now have peace in our lives.  No longer do we worry day and night about whether or not we’ll have enough to pay the bills, because we know that we are committed as a couple to do whatever it takes to get our debt paid off and to walk in financial literacy from now on.  And there’s no “thing” on earth that can buy that kind of happiness.