Feeding a family of six on less than $450 dollars a month means, at least for us, that we’ve had to get used to the fact that we can’t have anything we want to eat, whenever we want it.  In our prior, financially irresponsible life, if we wanted steak for dinner, we’d run up to the store and get some steak.  If we wanted chicken breasts, we’d simply go to the store and buy them (could this possibly be part of the reason we exceeded last year’s grocery budget by an easy $300 a month? 🙂 ).

But since we’ve chosen to live a more frugal lifestyle, in order to to get ourselves out of debt, those types of “treats” aren’t an option much anymore.  Instead, our meal budget is carefully planned out, 1 month at a time.  Also, we often end up eating “simple” meals, like the one pictured below. 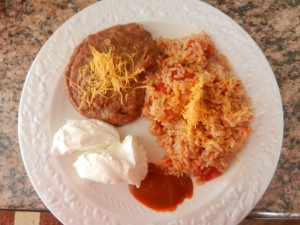 This simple meal of rice and beans cost our family of six less than $3:

It’s meals like this that allow us to feed our family on such a small amount.  But the really great thing about living on a small grocery budget is that it’s really caused us to appreciate food, in general.

The sad fact is that not everybody on earth gets to eat 3 meals a day, every day.  Although there is enough food on earth for every single person to eat roughly 2700 calories per day, government ransoming of food and a lack of giving on the part of many make food shortages rampant in third world countries.  There are also many food shortages right here in the U.S. due to the fact that people often mismanage the funds they are given, or they simply aren’t aware of or able to get to places that offer free food.  I’ve seen these scenarios first-hand in my many years of volunteering in different capacities to help feed the hungry, as well as experienced it myself during the years after my parents’ divorce, and let me tell you, it’s not a pretty place to be when you can’t feed your children.

Since we’ve chosen to place ourselves on a strict food budget, obviously we do have the option of spending more (although that wouldn’t be wise given our current situation), but placing ourselves on a limited budget where food is concerned has given us two blessings:

1.  We’ve tricked our minds into believing that “this is all there is”, helping us to be able to stay within the limits we’ve set.

2.  We’ve become extra grateful for every single meal we eat.  We find joy in the simplest of meals.

When you first set out to feed your family on less, it can feel a bit depressing.  The though of eating beans and rice or ramen noodles for the next year or more can convince you to throw a pity party real quick.  But keep in mind that if you commit to getting your finances in order now, the day will soon come when you’ll be able to go to the grocery store without having to stick to a budget.  But by that time, of course, you’ll have fallen in love with frugality and probably will still feed your family rice and beans on occasion. 🙂

Recipe of the Week: Beans and Rice