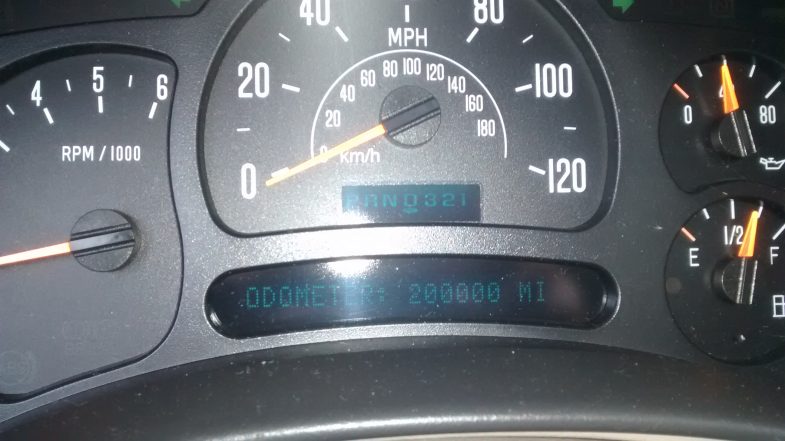 See that pic? That’s the odometer on our 2005 Chevy Suburban. It just hit 200,000 miles this last month.  I love our 2005 truck. It runs great. Looks good. And fits all of our needs. The fact that it’s eleven years old doesn’t phase me a bit, but it wasn’t always that way.

For years we were addicted to “new and shiny”. In our defense, we stayed mostly away from “big” new and shiny things after we moved to our McMansion in 2001. We moved to the McMansion right along with our 1999 Ford Windstar and our 2000 Chevy Silverado, both of which were bought new and shiny off the showroom floor.

In our world, we were livin’ the dream. Big fancy house, new cars. We were successful, right? Never mind that we borrowed to the hilt on all three of our new and shiny things.

But after awhile the $450 loan on the Windstar became a burden. I absolutely hated driving to the bank and giving them $450 of our money each money – even if it was interest free.

The pain of the situation became more unbearable than they “privilege” of our new and shiny car, and thus began a slow and painful journey to break free of the New and Shiny cycle of living.

If at First You Don’t Succeed

The first step we made in breaking our addiction to new and shiny was to stop buying BIG new and shiny things. We just kept reminding ourselves of the burden of that $450 van payment and that would cure us of the temptation to buy big.

Unfortunately, that wasn’t enough. You see, we hadn’t yet acquired the change in mindset that is needed to break free of the cycle of debt.

So we switched to buying little new and shiny things.

Nothing was expensive, but together it added up to living above our means. Every. Single. Month.

So even though we weren’t buying BIG new and shiny stuff, we hadn’t truly cured our addiction to new and shiny.

In October of 2012, exhausted from the rat race that is keeping up with the Joneses and eager for a more peaceful life, we sold the McMansion for an equally expensive hobby farm out in the country.

Our mortgage payment stayed the same but our level of peace skyrocketed.

When you’re stuck by yourselves in a quiet yard where you can barely see your neighbors, the lies that broke people believe aren’t drowned out any longer by the justification of what your neighbor is doing, buying and financing.

We were left to, as Dave Ramsey says, face the man in the mirror (or in our case, the man and woman in the mirror). We saw that we were financially fat. We also were able to see the keeping up with the Joneses lifestyle was nothing but a farce. We were able to see the hamster wheel of that life from the outside looking in, and we finally figured out how very little our pursuit of “stuff” really mattered.

Living in the country, we began to realize the value of peace. Of quiet. Of freedom – the freedom of not having to depend on an employer to survive.

Suddenly, our addiction to New and Shiny was replaced with a desire for more peace, quiet and freedom. We didn’t care any longer about what people thought of us and our possessions; we cared only that we were living life in a way that was making a difference for the better; in our own family and in the lives of the people around us.

Sometimes the debt totals went back up, not because we fell for new and shiny again, but because we’d dug ourselves into such a hole of debt (can you say “65% debt-to-income ratio”?) that any extra expense put us in the red again.

So we cried. And whined. And felt sorry for ourselves. And complained about how life wasn’t fair.

Then we pulled up our big boy and girl pants and got back on the debt pay off train.

Our debt isn’t gone yet, but it’s going down. And with each month that those numbers drop, we are one step closer to complete and total debt freedom, because every dime counts.

When we totaled our Suburban last spring it would’ve been real easy to get something new and shiny. It was a super tough year and we could’ve used a pick-me-up.

Instead we shopped around and I went by myself to a dealership to check out a Suburban that was ten years old – a year newer than the one we totaled.

It was in much better shape than our old one, and they were asking 9k. I offered 8k cash including costs. We settled for 8k plus costs, saving our family a thousand dollars.

Last week our Suburban hit the 200k mile mark, as is evidence by the photo above. My mechanic brother recently replaced a couple of belts and some other gadget of which I can’t remember the name, so it’s running perfectly.

We keep it spic and span inside and out, which helps us to appreciate the 11 year old truck more and keeps the value up too.

Recommended Reading: America’s Cheapest Family Gets You Right on the Money: Your Guide to Living Better, Spending Less, and Cashing in on Your Dreams

I often think about the day when all of our debt will be gone. Rick and I talk about what we’ll buy when these vehicles need to be replaced. We don’t have the van any longer, but we still have that 2000 Silverado and it’s got less than 100k miles on it. Rick drives a commuter car to work. We bought it new in 2013 and it’s almost paid off.

We’re pretty much set on never buying new again. We’ll likely choose to save megabucks like the Millionaires Next Door do and buy three to five-year-old used cars and trucks when we’re debt free.

We’re grateful that we have solid running vehicles that serve our needs well.

More than that, we’re grateful that we no longer rely on New and Shiny to pick up our self-esteems. It feels good to be happy with who you are, no matter what you own.

Have you broken the addiction to New and Shiny? If so, what was it that caused you to see the light?

Is Buying A New Car Really That Bad?