According to Experian’s State of the Automotive Finance Market’s latest report, people are still living with a love affair of driving expensive cars.

But is buying a new car really that bad? Does it really destroy your chances for financial freedom like so many experts claim it does? Let’s start by looking at the numbers.

Here’s How Much that New Car is Costing You

The average term for a new car loan was 68.53 months (that’s nearly six years), with the average payment being $509.

Why Are New Cars and New Car Loans So Bad?

You might ask “what’s the big deal” when it comes to these new, higher numbers. Well, let’s say that all is well in the land of new car purchasers and they can all afford to make their monthly payments without struggle.

What’s the problem with new car loans in that scenario?

The problem lies largely in opportunity cost. What is opportunity cost, you might ask? Opportunity cost is the money you could have had if you’d chosen to invest that monthly car payment money instead of spending it on a depreciating asset such as a car.

But that’s just the beginning. Let’s say that instead of making those monthly car loan payments to Keep-You-Broke Bank, you kept the money and drove a quality used car that you paid cash for, investing the money instead.

How much money would you have at the end of six years? 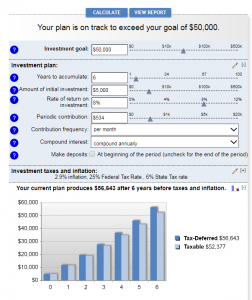 So, is it worth it? Is your once new and shiny car worth the $96k that you paid for it?

Only you can decide the answer to that question. For me, it’s absolutely not.

I’m not going to tell you that we don’t get sick and tired of driving our old cars at times. But we’re earning bigger and better returns by keeping those old cars and using our cash to do the following:

Yep, the average credit card interest rate is hovering around 13 percent. If you use your cash to pay off your credit card debt instead of buying a new car, you are earning a guaranteed interest rate equal to what you are paying on the card.

Bonus: you’re earning a greater peace of mind as you reduce – and eventually eliminate – the number of lenders that keep you tied to your paycheck.

Paying off your debt means you’re putting yourself into a position where you can tell your employer “goodbye” because you no longer need their money.

Investing for the Future

Instead of paying for that new car which will eventually end up in the junk pile, how about using that money to invest in your future?

What Matters More to You?

Now, I’m not going to deny that new cars are fun to drive and own. There’s little that compares to the sleek, shiny look of a new car or that fabulous “new car smell”.

However, when you compare the benefits to the weight of the monthly payment – especially if you are tight on cash to begin with – the new car smell isn’t so fun anymore.

I submit to you that financial freedom is more fun. Having the money to do what you want, when you want to (and that includes buying new cars) is much more fun when you are in a financial position that allows you to pay cash for those cars and other dreams because you “owe no man” and have a spectacular savings rate.

Save Money and Pay Off Debt Faster with a Personal Loan

The Smart Way to Take Out a Car Loan

Why These are Two of Our Favorite Savings Vehicles for Retirement

Have You Considered Buying Family Gifts for Christmas?