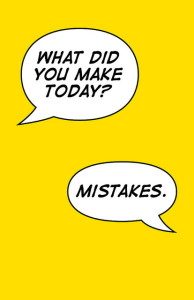 As a follow up to the wildly popular (and somewhat controversial) post I ran last week, entitled 6 Lies Broke People Believe, I’ve written a new post outlining some of the mistakes broke people make.  As we’ve talked about before here, it is often The Broke Mindset that keeps people struggling financially.  Once a person learns to recognize themselves in these oft-made mistakes, they can begin to take the first steps to retraining their minds in a way that promotes positive financial decisions.

1. Broke People Borrow Blindly.  Broke people often stay broke because they borrow money in an uneducated fashion. Payday loan places and rental centers are common friends of the financially strapped.  Broke people often make borrowing decisions based on whether or not the payment sounds reasonable to them.  They pay little attention to the interest rate or terms and conditions of the loan.

The Fix: Be more protective over your hard-earned dollars.  Don’t just hand them over to any lender in order to meet your instant gratification desires.  Instead, think any loan through thoroughly, weighing both the bottom line dollars you’ll be paying back and the length of time in which you’ll be serving that lender.  Better yet, resolve to avoid loans whenever possible, saving cash for future needs and wants.

Recommended Reading: Love Your Life, Not Theirs: 7 Money Habits for Living the Life You Want

2. Broke People Don’t Understand Their Value at Work.  Being a constant observer of people’s actions, I noticed three main types of workers when I spent my days in the public working world: those who thought they were worth more at work than they were actually worth, those who underestimated their value to their employer and those who had a clear and accurate understanding of what they brought to the table at their work.  Broke people, by and large, fall into the first two categories.  The first group walks in arrogance, convinced that they contribute far more to their employer’s success than they actually contribute.  The second group does the opposite: they work their tails off for their employer, yet underestimate their value and worth as an employee.  Both of these attitudes breed an environment that almost certainly ensures they’ll be paid less than they have the potential to earn.

The Fix: If you’re of the first group, face yourself in the mirror and smell the coffee.  If you’re continually coming in late, leaving early, having a crappy attitude and not performing your job to the best of your capabilities, and yet think you’re an asset to your company, you’re living in denial. Choose to make your performance match up with your rose-colored glasses image of yourself so that when you go in to ask your boss for a raise, it’s a well-deserved raise.

If you’re part of the second group, stop selling yourself short.  Write down all of the ways that you go “above and beyond” your required job duties, keep track of extra things you’ve done for a year, and then head into the boss’ office armed with the ammo you need to ask for that raise.  You do indeed deserve better.

3. Broke People Don’t Budget and Spend-Track.  Even when my mom was on welfare, a budget changed her financial life.  Having a “job” for each of her dollars ensured that as many of the bills as possible were paid, and it let her know how much more money she needed to earn to be in the black each month.  As a result of that budget, my mom retired at 62 with zero debt and a plan for how to manager her money during her retirement years.

Most people, however, don’t live on a budget, and have no real idea of what they’re spending their money on each month.  But as Rick and I learned when we went back and discovered the leaks in our financial ship, without budgeting and spend-tracking, we were spending MUCH more in each expenditure area than we thought we were spending.

The Fix: Always make a budget, every month, to have a clear picture of how much money you need to pay the bills.  Then, track your spending each month to make sure that you are staying within the budgeted amounts for each category.  While these two tasks may seem tedious and restrictive at first, you’ll eventually find that they are quite freeing, giving you the extra money you need each month to reach your financial goals and dreams.

4. Broke People Don’t Automate Savings and Retirement Funds.  There’s arguably no better way to save money than to automate it.  When you set up a monthly 401k contribution with your employer, that money comes out of your check – pretax – and you never even see it.  Before you know it, the years pass, and the retirement dollars are bigger than you ever could have grown them with a “pay yourself with what’s leftover” saving system. Most broke people, however, don’t ever implement a solid plan for savings and retirement.  They may hope for those things, but they plan to fund them with leftover money at the end of the month, and that leftover money simply never shows up for the party.

The Fix: By automating savings and retirement accounts each month, and treating them as regular “bills”, you’re ensuring yourself a cushion for both current day emergencies and future monetary needs.  Want even more proof of the wealth-building phenomenon of automating your savings? Check out The Wealthy Barber, Updated 3rd Edition: Everyone’s Commonsense Guide to Becoming Financially Independent

The Fix: Start imagining, seeing, dreaming and acting as if you were already financially secure.  Refuse to focus on past financial mistakes, instead, focus on the things you’ve learned and are doing to change your financial picture.  Remind yourself when messages of failure work to come upon you that “the old has passed away; all things are new”.  Don’t let your past dictate your future.  Walk instead in the newness of your financially educated self.

6. Broke People Don’t Set Concrete Goals.  In order for a goal to actually be achieved, it has to be a concrete goal and it has to have a solid action plan for success.  Most broke people have been broke for so long that they’ve lost the ability to hope and to dream.  The achievement of a financial or any goal has to start with hope and a dream, but if you’ve forgotten how to hope and dream, then achieving your goals likely won’t happen.

The Fix: Get hope.  Refuse to allow circumstances to take hope away from you.  Study and emulate people who have done what you want to do financially, using their success as a catalyst for your hope.  Then, study on how to set concrete goals and action plans to fix your individual money situation.  Set those goals and the action plans into place by writing them down, along with each small action step needed to get there, and then run your race.

If you’re one of the “broke” people that we’ve described here, don’t despair, and most certainly, don’t give up.  You do have the ability to educate yourself and change your financial situation for the better.  Contact us anytime if you want more information on how to do that. We’re happy to help.

What is the biggest “broke people” lie that you’ve fallen prey to?  What financial revelation changed the way you look at money?