We have been hitting the road towards debt freedom pretty hard for the past three years now. The car loan on one of our cars was the last big thing we had to get rid of before we could start throwing more at the mortgage. How to get rid of the car loan faster was something that had been vexing me since the beginning of the year. I was getting close to an answer to pay it off faster, when it suddenly happened. We were finally able to get rid of the last car loan, and buy two new used cars, with cash only. This was a miracle!

We had an appointment scheduled to get an appraisal on my car, since it was the one that was already paid off. The thought was that if we could get a decent amount for my car, then we could buy an older car for less money and then throw the remainder at Bryan’s car.

We were then going to try to sell his car, in hopes that we would get enough to pay off the rest of the car loan. The next step would be to also buy him an older car, that cost a lot less, and just pay cash.

After all, we had some money in savings that we could use to help us get out of this debt faster. Although, we really didn’t want to touch the money in savings, the interest rate on the car loan (5.5%) was higher than what we earned on our savings (2.4%).

This was how we figured it was supposed to happen, at least.

Fortunately, or unfortunately (depending upon how you look at it), this was not what happened.

A few days before we were scheduled to bring my car in, a young driver decided to turn left from the middle lane, straight into my car, and totaled it.

So much for getting an appraisal!

After a week of negotiating with the other guy’s insurance company, we came to a monetary agreement for the vehicle settlement.

Long story short, they ended up giving me about $8700.00 for my car as a total loss. We were in need of something a bit larger than what I had been driving, since we have five kids, and our oldest are both almost fourteen year old boys.

After some discussion we settled on a Honda Pilot. My Dad has had one for years and let me borrow it more times than I can count. They have a tendency to be very reliable, last upwards of 300,000 miles, have low maintenance costs and are very roomy. 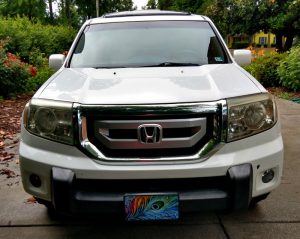 Since the model years changed, and the newer upgrades started happening in 2009, that was the lowest year we were looking at. The goal was to find one that cost less than what they were giving me for my totaled Kia Soul. But that was easier said than done.

I did a lot of research and ended up using a 250 mile radius search on CarGurus. This site is one of my favorite tools whenever I am searching for cars! Since we live in NC, the search ended up giving me results in SC, TN and VA, as well as my own state. 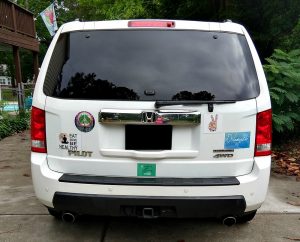 For the second car, we decided upon a Toyota Prius because Bryan needed a car with better gas mileage. We currently have 5 kids, in 4 different schools all over the county, and that definitely eats up the gas.

The up side to the Prius option, besides the much better gas mileage, is that they are pretty easy to find at cheaper price points. After running the same search radius on CarGurus, we ended up finding a 2010 Toyota Prius 5, fully loaded with a sun roof, in Greensboro, NC. This one was only about an hour drive from us, so we liked that better. 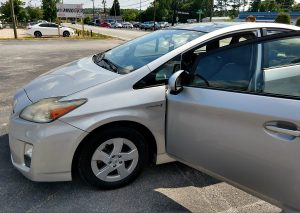 We were able to negotiate with this seller and were able to get the car at $5,600.00. While it has a bit more mileage on it, these cars can last close to 400,000 miles, if they are taken care of properly. I did some research about better options to replace the expensive battery ahead of time also and found this great resource (that we haven’t had to use yet), Green Bean Battery. If you have a Prius already, or are contemplating getting one, this is a resource you need to know about!

While we were able to get him a new used car, that is pretty darn nice, we still had to sell his car. That proved to be the trickiest part because we owed more on it than it was currently worth.

Ultimately, after going to a few different buyers, we were able to sell it for $8,700. We owed $14,000 on it though, so we had to pay the difference to get the title released. But, we got it done!

As you can see, the car I got was pretty darn close to what the insurance gave me for my totaled car. But we didn’t get enough on Bryan’s car to pay it off free and clear without putting some of our own money in. Then we had to buy his new used car with our own cash also. So here is how the numbers really broke down:

On top of saving all that money, we also got two cars that are better for our current lifestyle that are completely paid off. This means we are just one big step closer to reaching financial freedom. And we can’t wait to get there!

What creative ways have you found to buy cars with cash?

How Have We Adapted Our Lifestyle to Get Rid of Debt?

Is Buying A New Car Really That Bad?

How to Manage Your Cash as a Full-Time Freelancer

How We Decided to Change Our Budget This Year