The more I learn about canning and preserving, the more I realize I know very little about canning, preserving and cooking in general.  I’ve always considered myself a pro in the kitchen.  I love to cook, and, at the risk of sounding arrogant, 🙂  I’m AWESOME at comfort food meals like Thanksgiving dinners and meat and potatoes stuff.

The other day, however, I spent the day with a BFFs cousin, as she lovingly and patiently taught us how to make her Italian family’s famous spaghetti sauce recipe and to can it as well.  This woman cans and preserves like no one I’ve ever seen.  Her house is filled with jams, sauces and canned goods of all kinds, and her freezer is stocked full with breads and meals ready to give away at a moment’s notice.

After spending the day with a true expert, I realized just how little I know about cooking and preserving food.  For instance, did you know that the heartburn associated with spaghetti sauce can be eliminated by simply cooking your homemade sauce longer?  My friend’s cousin starts her homemade sauce on Friday morning and doesn’t serve it till late Sunday after noon.  The three-day cooking process helps cook out the acid in the tomatoes, leaving the sauce hearty and heartburn free.  I have long been looking for a solution to make our spaghetti sauces and chilis taste not so acid and “vinegary” and now I’ve got my answer!!

So,  BFF and I have been talking for years about learning how to make and can spaghetti sauce, but we were always overwhelmed by the thought of it.  Turns out that making homemade tomato sauce or spaghetti sauce, although it is time-consuming, is really quite simple.  Here’s how it’s done.

How to Make and Can Homemade Spaghetti Sauce

Step 1: Clean the tomatoes, take out the cores, chop the tomatoes up and put them into a large pan.  We used a bushel of tomatoes and got 13 qt sized jars of sauce.  We bought our tomatoes from a local farmer.  A tip: If you want to use your own, but are finding only a few are ripe at a time, take your ripe ones, rinse them, core them, and store them in a zipper freezer bag until you’ve gathered enough to make sauce. 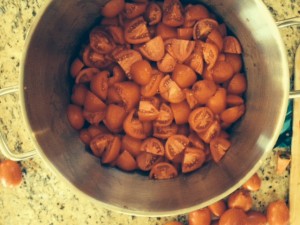 Step 2: Cook the tomatoes on medium until they are soft enough that the skins would be easy to peel off.  They’ll be mushy at this point, but not too mushy.

Step 3: Pour the cooked tomatoes into a large collander so that the juice drains out of the tomatoes.  Might be a good idea to save 2 cups or so of the juice in case your sauce turns out too thick for your liking, at which point you can add the juice back in to thin it out.  We didn’t need to do this.

Step 4: When the tomatoes are pretty well drained (a little liquid is okay, but most should be drained out), it’s time to separate the sauce from the seeds and skin.  My friend bought an attachment for her KitchenAid Mixer that did the job wonderfully.  Sauce comes out in one bowl, seeds and skin in the next.    The attachment looks like this: 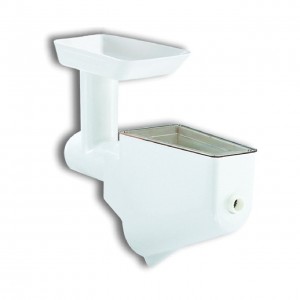 I would highly recommend this gadget, but I’m sure there are other options too.

Step 5: Once you’ve got your sauce, put it into a large pot.  At this point, we added in our “base” seasonings to taste: fresh chopped basil, fresh chopped oregano, fresh-pressed garlic and salt.  You could just leave it as is too and have tomato sauce instead of spaghetti sauce. Now it’s time to cook the sauce.  You want to have it fairly hot, making sure you are seeing at least a couple of big bubbles.  Stir often, and don’t have the heat too high – medium-high at the most.  It’s vital to make sure it doesn’t heat up too quickly or it will burn. 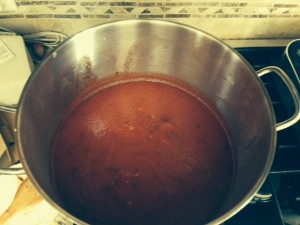 Step 6.  Prepare your cleaned jars/lids by placing them in a pot of water and bringing them to a strong simmer for several minutes.  Sterilization is key.   And remember to never let the hot jars touch each other, either during the sterilization process or after, as there is risk of glass explosion.According to my friend’s cousin, she’s had this happen, and it’s not pretty, so be careful.

Step 7: After the jars are sterile (leave them in the sterilization pot until you’re ready to use) and the sauce is at a mild boil, pull one jar out of the water at a time (using your canning tool kit)  and fill it, leaving a one and a half inch headspace.  Wipe the rim clean with a damp, clean cloth, place the lid on top.

Put the ring on to fingertip tight, and process according to your canning book directions.  Let sit on a counter until cooled, then store.

As with all home-canned foods, this can last easily up to a  year.  Before using, make sure that appearance, smell, etc., show no signs of spoilage.

And here is our finished product: 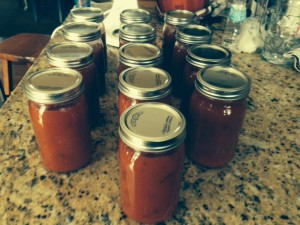 When BFF’s cousin is ready to use her sauce, here’s her secret to great tasting sauce.  She starts with a meat base in a large pot, either neck bones from beef or pork, or pork sausage.  She fries them up so there’s a nice meat-flavored base, adds in the sauce, and cooks on low all day, stirring regularly, adding in more fresh garlic, basil, oregano and salt as she sees fit.  Then at night it’s covered and put in the fridge to “marinate.”  Saturday morning it’s back on the stove to cook on low all day, Saturday night it’s in the fridge again.  Sunday it cooks all day and she serves it Sunday afternoon.  According to BFF’s family, it’s awesome. 🙂  Cousin said it would probably work fine to do it in the crockpot as well, provided you cooked it on low/keep warm.

PS.  This is not going to necessarily be cheaper than buying spaghetti sauce, unless you grow your own tomatoes, but the taste and quality of the sauce far exceeds what you’ll find on supermarket shelves.

Homesteading: Where to Start?