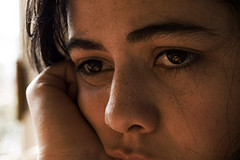 With all the chatter in recent weeks regarding the sad news about beloved actor and comedian Robin Williams,  I thought it might be time to share my own story about Depression.  The Robin Williams story hit home for me for two reasons: one, his July stay at Hazelden Rehab center put him a mere ten minutes from my home, as did his trip to DQ upon his release.  Hazelden, a world famous treatment center, is nestled up here in the boonies of Central Minnesota, and we drive by it on a semi-regular basis.  However, the other reason Williams’ story hit so close to home for me is that I suffered from severe Depression for nearly a decade.

Most people don’t have a clue about what it’s like to spend every waking minute of your day trying NOT to “off yourself”.  It’s horrible.  The sadness, despair, hopelessness and emotional pain that comes with severe Depression is devastating and terribly difficult to deal with.  Having been Depression-free for 17 years now, I thought I’d share what worked for me and what didn’t in dealing with Depression, as it’s a terrible thing when people feel there is no way out of this horrible disease.

What DIDN’T Work for Me

Drugs.  Now, let me start off by saying that this is NOT an anti-depression drug suggestion.  I know lots of people who have benefited tremendously from the use of the right Depression med in the right dosage.  But the drugs only made things worse for me.  Instead of feeling sad, I felt nothing.  Numb.  Like a robot.  I also tried several therapists, and this didn’t help me either.  I wanted them to tell my why I was feeling this way, but they wanted me to tell them why I was feeling this way!!!  Well, no shit, Sherlock: if I knew the answer to that I could work to change it!  Again, NOT anti-therapy here, but it didn’t work for me.  And as far as the drugs, I eventually came to the conclusion that I would rather suffer from the ups and downs of Depression than feel absolutely nothing at all, ever again.  Again, NOT saying this is the route all should go.  If the drugs are working for you, then by all means keep taking them.

What DID Work for Me

My faith in Jesus.  Jesus’ unconditional love for me (and for all of mankind) was the main thing that got me through.  I worked to learn and understand the true character of God, because sometimes He can (mistakenly) seem a little schizophrenic, am I right?  Learning that God and His Son, Jesus, do indeed have unconditional love for me and walking this out with them truly helped me the most.  I would focus on the Bible verses that talked about God’s love for His people, and read about all of Jesus’ willing works of healing etc., in the four gospels, and that gave me the “oomph” I needed to keep going.

A clean diet.  Eating a primarily whole foods diet also did wonders for me.  When your blood sugar goes up and down so dramatically due to a high sugar diet, (think kids at Halloween, the major league sugar rush and the following “crash”) your emotions can be affected as well.  After a lot of self-observation, I realized that the crash that occurred after sugar consumption would, for me, mean a crash in my mood as well that often took me two or three days to come out of.  When I switched to a primarily whole foods diet (I’ve gone months without any white flour or sugar whatsoever) the Depression improved dramatically.

Exercise.  This was another major league help for me.  Doing some type of aerobic exercise every day will increase your endorphins and improve your mood naturally.  So I worked to exercise regularly, and especially when I was feeling down.  If I felt the weight of depression starting to suffocate me, I’d grab Rick or a friend and go rollerblading, walking, biking or hiking.

Self-analysis.  This was a major league help as well.  Although Depression is caused by a low seratonin level in the brain, that seratonin level often drops after a traumatic event which leads to huge stress on the body.    Consulting the Lord via prayer and analyzing my life and when it started to spiral into Depression, I was able to pinpoint some major traumatic events, starting with my parents’ divorce when I was 11 and the abusive relationship I got into at 14.  Without going into great detail about that relationship, suffice to say it was everything you’ve seen in the movies.

From there, I started to “self-talk” my way through the reality of those events vs. my view of those events.  I would remind and teach myself, for instance, that even though it “felt” that way, that my dad did not leave me – he and my mother mutually separated due to their own problems, and both of them were heartbroken at having to give us kids up to each other at certain times each month.  Same with the abusive relationship I was in.  I would tell myself that “BF” didn’t hurt me because I was deserving of it, but because he was not well in his mind.  By replacing the lies I’d been believing about the traumatic events in my life with the truth about them, my self-esteem improved and I finally started to believe that I was the awesome, much loved child of God that He said I was, and not the major league loser that my brain told me I was.

Refusing to give up.  Just like with our debt, I had to work consistently in my head to teach myself that I was NOT giving up on a healthy me: mind, body and spirit.  I became my own personal life coach, focusing on my dreams and goals and learned to refuse to give up.

Although I still have sad days like everyone does, the Depression that I dealt with for so many years is totally and completely gone.  And as God as my witness, it is NOT coming back.  By Jesus’ stripes, I am healed. (Isaiah 53:5, 1 Peter 2:24)

Depression is a horribly devastating disease to deal with, and if you or someone you love is suffering from Depression, I encourage you to get help from a trusted medical professional as soon as possible.  Don’t let the horrors of Depression rob you of the life that you deserve.

Stories from the Great Depression

Are We Headed for Another Great Depression?