By now, you should realize that we like to do things frugally around here. And we pretty much have to in order to make our blended family of 7 work, and not kill our finances. That being said, we have multiple budget strategies that we use, and that includes when we want to take the whole family on vacation. Take a look at how our family summer vacation strategy worked out so that we only spent a total of $393.93 for 4 days!

All 5 kids were only out of school at the same time, and with us, for 1 week during the summer.So, we decided that was the opportune time to take them all on a 4 day vacation. Although, we knew that we needed to do it as frugally as possible, because kids are expensive!

The first trick that we used was to contact the HR department at Bryan’s work, because they happen to be affiliated with some hotels, as well as restaurants. He found out recently that anybody who works for any facet of the company can get an associate discount at any of their properties. WHAT?! Of course, we were going to have to use that as a summer vacation hack to make this work with our budget.

I don’t know about you, but summer is the hardest time for us financially. So this aspect was crucial to making the vacation work with our finances.

We were able to book the Marriott Residence Inn Wilmington Landfall hotel for 3 nights with 2 rooms across from each other for a pretty nominal fee.

At the last minute the hotel called us and asked if we could please work with them to rearrange our schedule and come a day later. Apparently, there was a glitch in their system and they overbooked for our first night, which was a Friday.

Now, I completely understand this because I worked at a hotel while I was in graduate school, and they had a similar policy. The hotels don’t make very much, if anything at all, when associates stay there. So it makes sense to try and bump them for full priced customers. The bonus for us was that they told us if we were able to help them out, they would comp our 3rd night stay for both rooms.

I was already inclined to do what I could to help them because I understood the position they were in, but them offering to comp our last night made it even more worthwhile. I was able to get things rearranged and we moved our trip by one day.

If you ever choose to stay at this very well located hotel (near Wrightsville Beach and next to a huge shopping center) ask for Desiree, because she is awesome!

Tip: Always check with your place of business to see if they have any affiliations with any other companies. You never know what kind of deals you may be able to dig up!

For us, one of the biggest expenses is always food. Going on vacation wouldn’t be any different, so we figured out a plan ahead of time.

Choosing this hotel was on purpose for many reasons, but the food played a big role in our choice. This hotel just happened to be one that not only had free breakfast every day (BONUS!), but had a small kitchen and full refrigerator in each room. They also had outdoor grills that we could use whenever we wanted to.

Our plan was to make a bunch of food ahead of time to bring with us and store in the refrigerator, so that there were plenty of options for lunches and dinners. We bought ice cream when we got there (because it would melt on the way down), so that we could make ice cream sundaes every night instead of taking them out somewhere for ice cream. Now please note that we do not give the kids dessert very often, so this was a big treat in and of itself. But doing it this way cost us a lot less than it would have just to take them to get ice cream one time.

We also brought some beer and wine from our house so that we wouldn’t have to buy drinks, which helped. On top of that, we found out upon check in that the hotel does a mingle night every Monday from 6-7:30 pm with free beer, wine, sodas and food. Since we were there on a Monday night, we definitely took advantage of that!

The person who served us the beer and wine (for us adults only, obviously) had helped us regularly during our stay, so we ended up tipping him $20. That was still within our budget, as was the $20 that we tipped housekeeping upon check out.

Tip: Try to find a hotel with a kitchen so that you can cook or heat up most of your own meals. It will be so much cheaper than going out to dinner even one time!

One of my brother’s happens to live in Wilmington with his family. So the first day we were there, we went to their house and grilled out with them. Then we went to the pool in their neighborhood so that all of the cousins could play. It was nice to be able to spend that time with them. It didn’t cost us anything other than the money we spent on food that we contributed, which was part of our food budget anyway.

The second day we were in Wilmington, we went to Wrightsville Beach to spend the day. When I used to live there in the 90’s, parking was free. Apparently, that is not the case anymore! It took us forever to find a parking spot and we ended up spending $10 on parking for a few hours. But, we all had a great time, so it was worth it. After the beach, we came back to the hotel and swam in the pool, which was a nice way to end the day.

We were all a little crispy from the day before (even though we reapplied sunscreen regularly), so we were looking for something else to do. I had never been to the New Hanover County Arboretum, but it was right down the street, and FREE. So why not check it out? It was a little bit hot when we got there, but we were excited to see what they had to offer. The cherry on top was that they have this cool backpack program where they will loan you a themed backpack with challenges and things to find. The kids all loved this idea, so they all picked one out.

We probably would have stayed longer at the Arboretum if it wasn’t so hot, but the complaining began to ensue, so we had to figure out a plan B. Luckily for us, I happened to know that there was a museum on the ASTC Passport program in Wilmington; the Cape Fear Museum of History and Science. So we drove downtown and had lunch in their outdoor gardens and then proceeded indoors to check it out.

The kids had a blast! Plus, it was air conditioned, so everybody was happy.

First they checked out the Space area, while one of the other kids started building customized bridges. 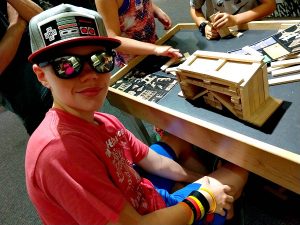 After that, a few of the kids put on a puppet show for us, which was hilarious and involved a lot of crazy animals! 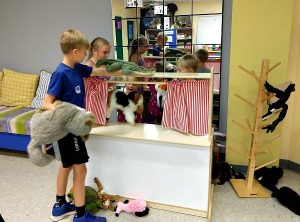 A few of them decided to be beavers and get silly in the beaver dam, which was a lot of fun. 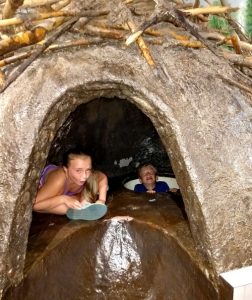 Lastly, we ended up watching the kids put on a theater production for us and having some fun with dinosaurs. 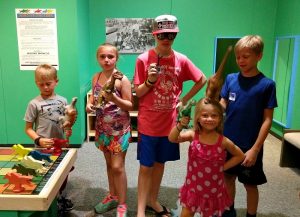 After a long afternoon of fun, we went back to the hotel to grill out and check out the Monday night mingle, which ended up being a lot of fun.

Tip: If you haven’t gotten an ASTC Membership yet, you really should check it out! We use ours all the time and it has saved us hundreds of dollars.

The last day we were in Wilmington, we headed down to the river front to check out the shops. One of the kids wanted to get a post card for their Grandpa, so we were on a hunt. The kids had a good time checking out the river and all of the stores.

Presley wanted a Venus Flytrap really badly, so I purchased the seed kit for her but she paid me back once we got back. Two of the boys have birthday’s coming up and wanted compasses and spyglasses in custom hand crafted boxes for their birthday’s, so we agreed to get them. Birthday’s are now done!

The river front was fun but short lived because it was getting too hot at this point. So it was time to hit the road and head back home. We all had a great time and I was really thrilled that we were able to pull off a 4 day trip with 5 kids for under $400.

I beat my own goal of coming in under $500 for the whole trip, but that was largely due to the extra added bonus at the hotel with them comping our 3rd night.

What is the best summer vacation budget that you have been able to pull off and how did you do it?

How We Are Going on Summer Vacation On The Cheap!

Was I Able to Keep Our Vacation Frugal?

Summer Budget Breaks and a Giveaway

How to Have an Awesome Family Spring Break on a Budget