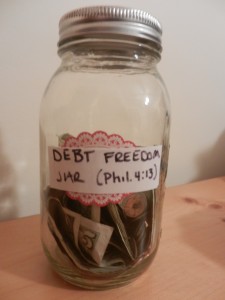 It’s been an interesting year here goal-wise for the Frugal Farmer family.  We did well in some areas, crappy in others.  In my true over-analyzation style, I’ve been spending the last couple of weeks assessing our 2014 behaviors, analyzing what we did right, what we did wrong, and working to form a more successful plan for 2015.  I’ve also been praying LOTS to God for wisdom in how we can do better.

I would say that, by and large, our biggest problem in 2014 is that we simply got too comfy with what we’ve already done.  We’re spending less, and spend-tracking, more than we did in 2013.  We worked more on self-sufficiency in 2014 than we did in 2013.  While that’s all well and good, the enemy of the best is “good enough”.  We don’t want good enough, we want “best”, and in that way, we really failed ourselves in 2014.

I’ve spent a good part of the last two weeks praying and seeking God for advice about how we can do “best” in 2015, and He’s given me (as is His custom 🙂 ), some AWESOME tips.  I won’t be sharing a whole lot today about what those tips are, as I really want the results to speak for themselves. But I will share the bigger pictures goals that we’ve set in place for 2015.

We have one and only one goal for 2015 regarding our finances, and that is that we be “gazelle intense” about reaching debt freedom.  I’ve commented in other posts about how we just couldn’t get motivated by Dave Ramsey and his gazelle intense method.  As I sat in prayer these last couple of weeks, the Lord revealed to me that the reason we haven’t been motivated by the Gazelle Intense plan is because we haven’t truly wanted to be gazelle intense.  Ouch.  But true.  So, using the instructions He has laid out for us, we begin today on our journey through gazelle intensity. The plan involves seeking Him first every step of the way for every dime that comes into this household.  I will be giving detailed reports on what that means each month, and how we do.

Our goal in homesteading this year is simply to kick it up big time regarding growing and preserving our own food.  Although we did plant and preserve more this year than we did last year, we were nowhere near our goal of providing the veggies we need for the entire year.  Some may say I’m a bit of a conspiracy theorist, but I am gravely concerned for the financial state of America, and part of that concern is due to rising food costs.  Part of the way we keep our grocery bill so very low is to memorize food prices so that we know when we’re getting a good deal, and when we’re not.  As I’ve shopped these last several months, I’ve noticed several key necessity food items going up, up, up in price.  This is not a good indicator of stability for the future of an America that is increasing in consumer debt and government debt on a daily basis.  As such, our goal will be, as Rick says often, to “plant the hell” out of our garden.  For instance, we tried potatoes for the first time last year, planting 12 plants which yielded about a pound of potatoes each.  Potato plants have the capability to produce 5 pounds of potatoes easily, so we’ll work to increase our yield by planting many more potato plants, and by adding fertilizer and putting in place some other tips we gleaned from a gardening expert friend last fall.

So, there you have it: two simple goals for 2015.  However, both are goals that will take a huge commitment of our thoughts and time.

What are your 2015 goals?  Was there an area you failed in last year that’s laying heavy on your heart?