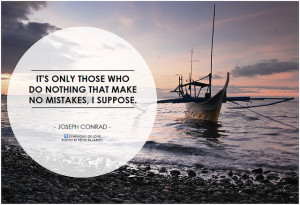 As I mentioned in our 2015 goals post, we didn’t put as much money toward paying off debt in 2014 as we would’ve liked to, and I’ve diagnosed 4 debt payoff mistakes that hindered us from performing as well as we could’ve last year.  Here’s a list of those 4 debt payoff mistakes, and what we’ll do (and what YOU can do) to make sure we don’t repeat them in 2015.

The biggest of the debt payoff mistakes we made last year was that we lost our “laser focus” on whittling down our debt.  We forgot that our debt was an emergency, and we didn’t put the laser sharp focus on paying it off that we had in 2013.  This resulted in a dismal success number at the end of the year.  If this was you, here’s how you can avoid that mistake again: The remedy: Commit to and stay aware of how important it is to become debt free, and put charts, graphs and reminders in place to make sure you remember your goal.

The Enemy of “Best”

The enemy of “Best” is “Good Enough” and we definitely fell into being comfy with the changes we made in spending – too comfy.  We spent lots of time patting ourselves on the back for doing “better” than we had, and doing “better than most”.  When working toward any goal, looking down at the less successful instead of up at the most successful is a recipe for failure every time.  The remedy: Focus on role models who are ridiculously frugal and goal-committed, and stop comparing yourselves and your spending with others in your life who don’t have the same goals as you.

One of the things that we didn’t do very well on this year was continuing to learn more techniques on getting free from our debt.  Figuring we knew “enough” we didn’t put much effort into learning more tips and tricks for getting to debt free faster.  The remedy: Commit to continuing your personal finance education always, learning all that you can about how to live more frugally and put more money toward debt.

Yep, this was us.  We were honest with ourselves in some areas, but we ignored other areas of spending that could’ve been reduced in order to put more money toward debt and dump it as soon as possible.  The remedy: Be honest with yourself about every area of your spending.  Don’t just assume you’ve “only spent” so-and-so, especially in areas such as entertainment, groceries and clothing.  Write it down, track it, and own up to your expenditures.  The sooner you do this, the sooner you’ll work on cutting expenses and dumping your debt.

When working to reach any goal, it’s not the mistakes that are the problem: it’s the unwillingness to own up to and correct those mistakes.  Work to reach your goals faster this year by admitting and correcting the mistakes you’ve made that have caused you to wander off course.

How We’ll Accomplish Goals That We Failed At Last Year