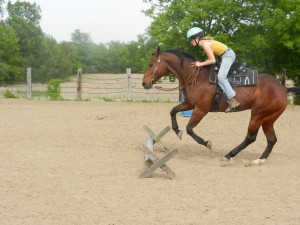 Ok, yes, I know it’s April 4th.  I’ve been a little hesitant to set goals for this year for 2 reasons:

1.  We’re in such a tight situation financially right now that it’s difficult for us to even put any extra towards credit card debts, much less think about goals.  Up until now, our goals have been to pay all of our bills every month and not use credit any longer.

2.  The stubborn side of me HATES to fail, so I know that whatever goals I put down here will have a large chance of being met, even if it means we don’t eat for a month (Of course ya’ll know I’m kidding.  Ok, half kidding.  The kids can survive on dandelion leaves for a few weeks, can’t they? 🙂 )

But on the upside, I know that if I do put down some goals here that:

1. I’ll have a much better chance of reaching them, for pride’s sake, and

2.  We’ll likely push ourselves harder than we would have otherwise.

The other tough part about us setting goals for debt payoff is that we have two major expenses we are saving up for right now:

– the need for new roofs on the dwellings here, the house for sure, but possibly the outbuildings as well, within the next few years.  We’ve had conflicting opinions on exactly when we’ll need the roofs; some say a year, some say 5.  This could run us between $10k and $40k.

– a commuter car for Rick.  His current commuter car is hobbling along, but just barely.  We are terrible at buying used cars.  Despite the immediate depreciation of a new car, in the past we’ve almost always bought new and then ran the car into the ground.  Rick’s truck is 12 years old, and our minivan we bought new and kept for 10 years.  We then bought a 6 year old Suburban which is 9 now and has served us fairly well.  But in general, we are just plain bad at buying used and tend to end up with pieces of junk.  So, we need to make some decisions about if and when Rick’s current 12 year old Saturn dies, what we will replace it with.  Obviously, a new car at this point in the game would not be a wise purchase.

1.  We’d like to eliminate half of our consumer debt.  This is a LOFTY goal, given our DTI, our current income and our current CC amounts.  But I’d really like to push us to get as much as possible paid off on the CC’s, just because of our dire situation.  We’ll work toward this goal by cutting spending and looking for ways to increase income.

2.  Put $4,000 in savings, at least.    This is another ridiculously lofty goal, given our situation, but we’ve already got $2k in savings thanks to our tax refund, so we’re going to set the bar high here.

I know that part of setting goals means setting obtainable goals, but I really feel we need to push ourselves here if we are going to do our best this year.

Do you find that setting lofty goals helps you to do better, or to instead become discouraged?

How We’ll Accomplish Goals That We Failed At Last Year

2015 Goals for The Frugal Farmer Family