In one of my very favorite books, given to me by a friend who knows of my love for the era known as The Great Depression, the subject of frugality arises often. The book, How to Cook a Wolf

, written by MFK Fisher, is described on the back cover as being:

Written to inspire courage in those daunted by wartime shortages.

The book, written by what seems to be a quite well-off woman well-versed in frugal living, shares the joy in living a frugal life and practical tips for doing so. You see, up until the early 1900’s, frugality was “normal” in America. It was the way of life. Phrases such as waste not, want not were commonplace in homes. To drive home the magnitude of the differences between life in America now and life in America 100+ years ago, let’s look at some statistics:

Consider this information from The American Mortgage in Historical and International Context:

Before the Great Depression, the single-family home mortgage was a very different instrument. Until the 1930s, residential mortgages in the United States were available only for a short term (typically 5–10 years) and featured “bullet” payments of principal at term. Unless borrowers could find means to refinance these loans when they came due, they would have to pay off the outstanding loan balance. In addition, most loans carried a variable rate of interest. Bartlett (1989) presents a fine historical overview of the origins of the modern U.S. mortgage. Home mortgages typically had very low loan-to-value ratios of 50 percent or less and thus did not, by themselves, place substantial stress on lenders, because when borrowers were short of cash, their property could be sold if necessary to redeem their loan.

The times have changed, as you well know, regarding the use of credit card debt in America as well. Consider the following graph: 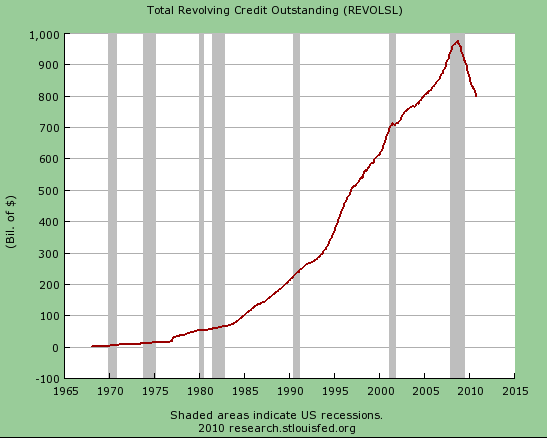 If the above graph isn’t a sign of how things have changed in America, I’m not sure what is.

One of my favorite stories from How to Cook a Wolf

shares when the author’s grandmother participated in a group in which young housewives shared what they had learned about frugal living. I’ll share the smirky story with you now:

Once during the last war (World War 1), when rationing of sugar and butter had been in effect just long enough to throw all of the earnest young housewives into a proper tizzy, my grandmother sat knitting and listening to a small excited group of them discuss with proper pride their various ways of making cake economically. Each felt that her own discovery was the best, of course, and insisted that brown sugar or molasses-with-soda was much better than white, or that if you used enough spices you could substitute bacon fat for butter, or that eggs were quite unnecessary.

Finally, my grandmother folded her knitting, and then her hands, which was unusual for her because she believed that no real lady’s fingers should ever be idle. “Your conversation is very entertaining, indeed.” she said with somewhat more than her ordinary dryness.”It interests me especially, my dears, because after listening to it this afternoon I see that ever since I was married, well over fifty years ago, I have been living on a war budget without realizing it! I never knew before that using common sense in the kitchen was stylish only in emergencies.”

This epic paragraph, in my mind at least, clearly states the differences between life in America now and life in America 100+ years ago. Somewhere along the line we have forgotten to be wise, frugal and reserved in how we live our lives and spend our money.

This is not a “slight” to the “others” – our family is equally guilty of abandoning common sense regarding our finances in exchange for I’m-not-sure-what. Maybe instant gratification? Maybe a lack of priorities or goals?

I don’t know, but somewhere along the line we have forgotten to include frugality as a normal part of the American life. Each new decade starting after the end of the Great Depression saw its own “new” way of living.

The 50’s and 60’s ushered in the first common use of the credit card. Although then, credit cards were reserved for the proven wealthy, I think a change in lifestyle was started here that eventually trickled down to every American.

The 70’s saw the invention of the two-income family, but that extra income did little for the prosperity of the American people.

I talk here about the worst financial advice I’ve ever received when the bank I worked for was promoting their credit cards with the slogan:

This was in the very beginning of the 1990’s, which followed a slew of other alarming statistics from the 1980’s that should’ve been a warning bell that something serious was happening to the money management system of the American individual:

Somewhere along the line, we’ve abandoned frugality for a “better” way of life that, ironically, has done little but damage our quality of living, and I find this fascinating. And sobering.

The roaring twenties was also a time of reckless abandon and que sera sera thinking when it came to money management, and the crap seriously hit the fan following the October stock market crash known as Black Tuesday.

What followed was a good decade and a half (and some say even longer) of serious trials and tribulations during the period known as The Great Depression. As I watch our governmental debt rise and our consumer debt remain steady at a lofty 3.2 trillion dollars, I wonder how the people of our grand country would fare if a serious economic meltdown hit our shores once again.

I worry about this quite a lot, honestly, and that worry is a catalyst for us as we continue to pay down our consumer and mortgage debt and work to practice frugality on every front. We’re definitely a work in progress and we’ve got a long way to go, but we’ll get there – because we have to. Failure is not an option, as Ed Harris said in Apollo 13. Won’t you join us? Let’s make frugality once again stylish. Let’s make paying off debt the new, cool thing to do and abandon the fruitless efforts to keep up with the Joneses. You in?

Who Benefits From My Debt?

Are We Headed for Another Great Depression?

5 Reasons I’m Choosing to Stay Out of Debt