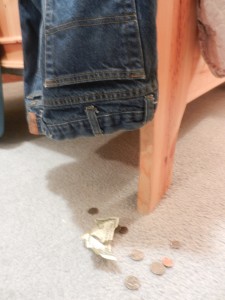 I know, I know.  After my April rant about how we were going to buckle down on spending even more after realizing that our debt is an emergency, here we are completely blowing our May entertainment budget.  I swear to you: we are not idiots, or self-centered people who just can’t get control of our spending.

Instead, we learned a valuable lesson about value-based spending this month, and that’s what led to us trashing our entertainment budget this month.  We spent more on entertainment this month than we did in the previous 4 months combined.    Here’s why:

The beginning of the month, we got a call from relatives in a neighboring state, saying they’d be coming down to the cities for a visit.  We haven’t seen my mom’s cousin, Carol, in nearly 8 years.  We haven’t seen her youngest daughter in nearly 40 years.  So we just couldn’t pass up the opportunity to get together.  Problem was, no one in our family has a house big enough to hold 30 people anymore, so we chose to get together with our out-of-state relatives and extended family at a local restaurant.  Cost for me and the kids for dinner (Rick was working):  $38.79

Also in the beginning of the month, we got a call from dear friends who wanted Rick and I to join them out for dinner.  Now, the last time Rick and I went out to dinner was nearly a year ago, and that doesn’t even count, because a nice man named Miguel accidentally dropped his nametag in our salad, and so our dinner was on the house.  The last time we went out and actually paid for dinner?  I couldn’t tell you.  Two years ago, maybe, with these same good friends.  Anyway, to us, it was worth the spend.  Total cost:  $27.02

Our friends are leaving us. 🙁

Another thing that happened this month is that one of our BFF’s got a great job offer – several states away.  Although they don’t necessarily want to move, this opportunity is just too good to pass up, and they’re planning on being away for only 2 years or so.  That being said, we are super close with this family, and want to cherish the time we have left with them before they move.  So when Maddie and their oldest boys, who are two of her very closest friends, wanted to go see Ironman 3, we said “yes”.  Our BFF’s (who have been more than supportive of our journey to debt free – thank you for that) graciously had the tickets purchased for Maddie and I by the time we got there, so we just had to pay for snacks, which came to $16.00.

Later in the month, the wife of our BFF family and another BFF we both cherish decided to go out for a long-overdue lunch before they move out of state.  Cost: $8.99

The other big purchase we made this month falls half under the category of entertainment and half under home improvements, both of which are definitely not necessities:  We put in a fire pit.  The reasons for putting in the fire pit now are two-fold: 1, in the country, it’s wise to have a fire pit for burning the various things that need to be disposed of, such as downed trees/branches, etc.  Our 7 1/2 acres are over half woods, and the strong winds out in the country leave a need to burn stuff on a regular basis.

The other reason for us choosing to put in a fire pit is because it’s basically free entertainment, and will give us a way to entertain not only ourselves, but family and friends as well, for 3 seasons out of the year, at no cost.  We originally planned to line the fire pit with paver bricks, which are relatively cheap, but Rick found a huge rock pile in the woods filled with small boulders that made the perfect lining for our fire pit.  We saved $100 by choosing this route instead of the brick paver route.  That being said, we decided to fill in the area surrounding the pit with river pebble, because the water pressure out here isn’t great, and the fire department is a good 10-15 minutes out, so we figured that having grass surround the pit wasn’t the greatest idea.  As usual, when planning for home improvements, we under-estimated, and the $50 we originally spent on river pebble wasn’t enough, so we had to go back and get more.  Total cost for the fire pit: $135 and S’mores ingredients to break it in with friends: $11.13, totaling $146.13

The other three outings were normally what we would’ve allowed in the budget: grab and go type of stuff, totaling $59.90, which is on the higher end of our acceptable limit for entertaining.

And then yesterday, I had a “we just need a break” day.  There’s been a lot of physical work here this month, along with a lot of emotional ups and downs regarding the debt payoff, and we were all a bit at the end of our ropes.  Cost for lunch from Walmart for the kids and I as we headed out to the beach? $17.22

I guess the point is that when you are working to get out of debt, occasions are going to arise when you need to make a decision about spending that may not line up with your goals or budget.  A crossroads, so to speak.  And it’s important that when you approach that crossroads, that you do so not only with common sense, but with a bigger perspective than just your budget and your money goals.  Grayson at Debt RoundUp talked about this same thing this month.  There also seems to be a good bit of people that blew their budgets this month, judging from this post over at Club Thrifty and the comments that followed,  so this helped solidify in our minds, too, that blowing your budget happens.

It’s important, however, that blowing the budget doesn’t become a habit, because that is what leads people and families into a debt problem in the first place.  That being said, there are occasions, and only you can determine what those occasions are, when it’s worth it to spend them money.  Just make sure that those breaks from your budget are an occasion and not a habit.

Frugal Home Hacks that Save us Hundreds Per Month

Paying off Debt: How to Recover From a Blown Budget Month

How We Decided to Change Our Budget This Year