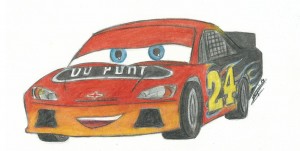 I want to talk a little bit today about, I guess, what it takes to reach a goal.  Our oldest, the author, is also a talented artist, as you can see from some of her work that I’ve shared here.  Somebody said to me the other day about “how nice it must be, how lucky you are, to have such a talented child” and about how some people get all the “luck”.  At first I was pretty ticked off at this comment.  Why?  Because “luck” has very little to do with it.  Maddie has been drawing for 3-6 hours a day, nearly every single day, since she was three or four years old. She started with horses.  Her first horses were pretty much like any other 3-year-old’s horse drawings.  It bothered her that it didn’t look like a “real” horse, and thus began this never-ending journey to draw well.  If you estimate the number of hours Maddie is put into art alone, you’re looking at a staggering 10,000-25,000 hours of work.  She may have a passion for art, but the talent she has was born out of a crap load of work. 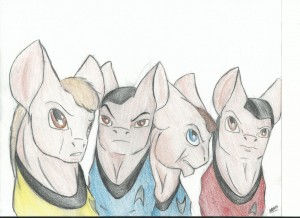 And so it is with a journey to debt freedom and financial independence.  So many times, people, when they hear about our journey out of debt, walk away from us, shaking their heads.  “I could NEVER do that” they say of our sacrifices.  Do people really think it’s all about luck or talent to become wealthy, or healthy, or knowledgeable in an area?  When I think about all of the people out there who are working for or have achieved debt freedom or financial independence, it’s not because they won the lottery or inherited cash, it’s because they made the sacrifices necessary to reach their goal.

Maddie doesn’t play video games, at least not very often: she chooses to spend time perfecting her art or writing books instead.  People working toward debt freedom also make sacrifices and different choices: they cut cable, they stop – or at the very least, minimize – spending money on take out and restaurants.  They spend their time budgeting and spend-tracking instead of shopping and spending.  They stop buying pop, chips and other garbage at the grocery store in hopes of lowering their grocery bill.

The same goes for people with health goals.  Those who want to lose weight, feel better, look better or be healthier choose to walk/run/bike/swim or whatever instead of sitting on their duff watching TV.  They choose to eat a salad instead of a bag of chips and a pop.  They skip dessert and go for a walk instead. 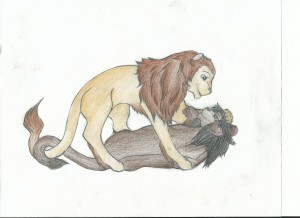 This is not necessarily hard to do but it does take a willingness to assess and make changes that line up with your goals.  It means that, if you have a financial goal for instance,  instead of going to Dairy Queen you buy the family a half gallon of ice cream.  Instead of going out for pizza you pick up a couple of $5 pizzas at Domino’s.  Instead of paying for cable you use Netflix instead.  You decide which purchases you make bring you value, and which don’t, and you choose to spend your money on the things that are most important to you instead of buying whatever you want, whenever you want, in search of instant gratification.  You choose big picture success instead of short-term happiness by making little, consistent changes.

If you have a weight loss goal, you use the same techniques.  It may be too hot to walk outside, but instead of sitting on your tail you clean the house.  Instead of having a giant slice of pie you have a thin sliver.  It’s the smallest amount of extra effort that separates failure from success – it just has to be consistent effort.

Friends, if you’re not satisfied with how life is going, choose to change things up.  Those first days of living differently and not giving in to your every whim may be difficult, but the satisfaction that comes with having control over the human natural bent toward doing whatever feels good at the time is unmatched in both peace and in success.

Your Family “Traits”: Which Will You Choose to Follow?

How to Choose the Right Accountability Partner

Debt Freedom: Success is About Consistency