I am generally a very driven person, but sometimes the most menial of tasks seem daunting to me, so I continue on the path of “least resistance” until it hurts too much to go on.  That was kind of what prompted our journey to get out of debt too, I suppose. 🙂

So anyway, the thought of going to the home improvement store, buying the bucket, lid and the ingredients, reading the recipe, making it, etc., sounded terribly overwhelming to me.  And then something happened.  I’m not even sure what it was, honestly, but one day I just got angry about spending so much more on laundry detergent than we needed to, even though the yearly amount we’d be saving (roughly $75) wasn’t all that dramatic.   Suddenly, I felt as if I were being ripped off, and the work involved in making it seemed like more of a way to stick it to consumerism instead of that daunting task it had felt like for so many months.

And at the beginning of November, I did it.  I spent the roughly 45 minutes in the kitchen I needed to spend in order to complete the project, and I’ve been using my homemade detergent ever since.  Here’s how it’s worked so far:

Ease in making.  It really wasn’t terribly difficult to make, though it was tedious.  You have to melt the Fels Naptha bar in water on the stove top, stirring it regularly.  This is the most tedious part of the project.  All said and done, though, definitely no more than an hour to make from start to finish.

Consistency.  It was weird to get used to at first.  I’m not sure why, but I kind of assumed my finished product would look like normal, chemicalized detergent, but it didn’t.  It looks cloudy and debris-ish, like this: 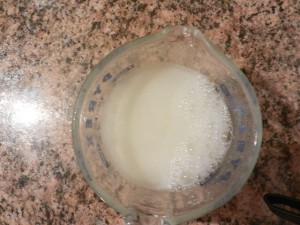 It’s also more watery than store-bought detergents, but that doesn’t seem to affect the cleaning capabilities at all.

Scent: The scent is quite refreshing, actually.  It smells clean and good, but not “perfumy”.  Usually anything with perfumes in it gives me an instant headache, but not so with this stuff.

Cleaning capability:  It cleans our clothes surprisingly well.  I was worried about residue, due to the fact that our washer isn’t the greatest and doesn’t agitate well, but I have had no problems whatsoever with residue or stain removal.  I haven’t yet tried it on a concentrated stain, but suspect it would work well.

Environmental impact: We try to be largely chemical free in our house, so I’m always paying attention to what is in the things we use and consume in our house.  Being aware of the chemicals around you – and minimizing them – will lead to better health, and therefore money savings.

In order to check out the environmental and health impact of the homemade laundry detergent, I turned to a site called Environmental Working Group.  EWG rates all kinds of cleaning products, health, and beauty products based on their toxicity levels coming from the ingredients within them.  Here’s what I found regarding our homemade laundry detergent:

Fels Naptha Bar: This was rated a C+ by EWG, due to some concerns (they rate the ingredients “some”, “low”, “no”, “moderate” or “high” concerns) about mostly cancer risks and respiratory/asthma risks.

Arm and Hammer Washing Soda: This was rated an A+ by EWG, with virtually no toxicity or environmental concerns – yea!!!

20 Mule Team Borax: This third ingredient was rated an F+ by EWG, with high concerns for developmental and reproductive toxicity.  This is a concern to me, and I’ll be pondering this more.  The ratio of Borax vs. water is low (1/2 c. of Borax added to 10 gallons of water) but this is still a concern for me.  I guess this explains why Borax is so effective at getting homes rid of rodents, huh?  Scary stuff. 🙁

So, based on EWG’s rating system, we could give the homemade laundry detergent a “C” in terms of an environmental grade.

How does this compare to my old laundry detergent?  The Arm and Hammer Liquid Detergent Dye and Perfume Free rated a “D+” with moderate cancer concerns and some respiratory concerns.

I’m toying around with trying the detergent without the Borax next go-around, which would bring the environment rating up to a B.  I’ll have to research more thoroughly why the Borax is used and if it would clean as well without it.

So, what do you think: would you ever try a homemade laundry detergent?  Are chemicals in our environment a concern to you?