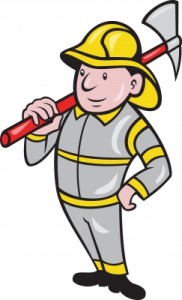 With Rick having worked on a local fire department for over 23 years, every once in awhile we’ll get to “reminiscing” about certain situations he’s experienced during his job as a firefighter.  The other day, we got to talking about some of the more crazy fire experiences he’d either seen, or we’d had at our own house.  You might find it interesting that we’ve had three potentially deadly “almost fire” situations at our home, simply because we are beyond safe concerning fire safety here.  We don’t burn candles in our house, and anytime we have a bonfire in the yard, we tend to it meticulously, assuring that there will be no chance of it burning out of control or having embers jump out and cause trouble to nearby trees or buildings.  Yet, we’ve had three instances in our own home where we could’ve ended up with a very destructive fire on our hands.

Today I’d like to share some of these stories with you, so that you don’t fall prey to these same potential troubles in your own home.

1.  The Remote Control.  Some of you may think that the danger of a remote control starting on fire is nothing but urban legend, and you can find Internet stories that will back up that theory, but we learned firsthand that although the risk is very rare, there absolutely can be a risk there.  One day, while Rick was at work, the kids and I ran out to do a few errands.  When we got home, our oldest headed downstairs to turn on the tube.  She picked up the remote, which had been laying, face-up, on the carpet.  She quickly dropped it and ran upstairs to tell me that it was hot – really hot.  Now, Maddie can be a bit paranoid about stuff like this after having a dad who fought fires for 23 years, so I didn’t think much of it when I went down to the family room to check on the remote.  But when I picked it up, it was hot enough that it left a small burn on my hand. I quickly threw it out back onto our patio, grabbed a screwdriver and pried open the battery compartment.  The batteries were starting to smoke, and the inside battery compartment on the remote was melted – I kid you not.  I researched some causes on the Internet; cheap remote, dead batteries, remote lying face down on a surface, causing a button to be continuously held down – none of these applied to our situation, and there were no recalls on the remote either.  Lesson learned: To this day we’re not sure why our remote did what it did, but we do keep a better eye on them now and never leave them on a flammable surface when we’re going to be leaving the house.

2.  The air exchange system.  This one happened as we were just about to leave our house.  Maddie – the ever attentive child – smelled something burning in the house, like plastic burning.  I smelled a faint whiff of it too, but tended toward dismissing it, as the air-exchange system (which pulls in air from outside and exchanges it with air from inside) sometimes will cause us getting a smell of whoever’s doing whatever outside.  However, this time the smell seemed to be getting stronger.  After wandering around the house checking every possible source, we went to the air exchange system itself.  No smell, but when we took off the metal cover, it was blatantly obvious that the burning plastic smell was coming from the motor itself.  We unplugged the unit, scratched our plans to leave, and I started doing online research, only to find out that this particular air exchange unit was under recall for the possibility of starting fires in homes and that three homes had actually been destroyed from malfunctioning motors.  Lesson learned: always be on the sign-up list for recall notifications of products you own in your home, and don’t ignore strange smells.

3.  The coffee pot.  Similar situation here where we smelled something burning, and lo and behold, Rick gets to the kitchen and finds the coffee pot smoking with a small fire brewing from the inside the motor area!!!  Again, no recalls were listed for this particular product.  We also had a situation where our hair dryer burst into flames WHILE I WAS USING IT.  That gave me some serious paranoia for the next several weeks.  Lesson learned: never, ever leave appliances plugged in when not in use, especially if you’ll be leaving the house.

5.  The electrical wiring inside your walls.   Now, this is rare, so don’t freak out, but on occasion, electrical wiring can go faulty inside of a wall.  Rick had a call one time where a gal smelled burning inside of her million dollar mini mansion and called the fire dept.  The team traced it to the inside of her wall, broke through the wall, knocked down the very small fire, told her to get an electrician out there immediately and to absolutely not leave the house so that she could keep an eye on any other potentials within the wiring.   So, she called the electrician, but he couldn’t get there for a couple of hours, so she thought it might be fun to go hang out at the neighbor’s house while she waited.  Sure enough, another part of the wiring started on fire, but by the time she saw the smoke from the neighbor’s house, it was too late.  The whole, giant, brand new house went down.  Yes, insurance (and a lawsuit against the builder) covered the costs, but the family lost all personal possessions and risked the lives of many a firefighter as they fought the flames of the fully engulfed house.  If she had stayed home to keep an eye on things, she would’ve smelled another area of burning and been able to have the fire dept. there within a couple of minutes, and saved her house.   Lesson learned: When you’ve got a potentially dangerous fire hazard possibly brewing at your house, don’t leave the house unless your life is in danger.  Instead, work to locate the source of the smell, smoke or whatever, or call for professional help to come right away.

I hope this has been a helpful post for you all.  Many of the fires that occur in homes are completely and totally preventable with some wisdom and knowledge about potential fire hazards, so, do your best to stay safe while in the home.

Any other fire hazards you could add to the list?  Did you learn anything new from the information here?

Work From Home or Stay at Home: How to Balance the Tasks

Before You Buy Your First Home