I had the privilege this week of reading Robert Kiyosaki’s latest release, Second Chance. Kiyosaki, of Rich Dad, Poor Dad  and Cashflow fame, made a huge impression on me several years ago when I read his first book, Rich Dad, Poor Dad.  Since then I’ve read several of his books, including a recent release he co-wrote with Donald Trump entitled Why We Want You to Be Rich.

Why You Need a Second Chance

One of the things I truly enjoy about Robert Kiyosaki’s books is that, aside from his revolutionary ways of viewing and teaching personal finance, it’s evident in his writings that he truly has a heart for seeing people succeed. Second Chance was no different; Robert’s hope for this book is that it revolutionizes the way people view money, wealth and how to go from being poor to being rich. The book isn’t just about money, it teaches people how to view themselves in a way that nearly guarantees financial and life success. If you can grasp the concepts that Robert Kiyosaki teaches in the Second Chance book about what type of mindset it takes to achieve success, then you can take absolutely any current life situation and turn it around for good. 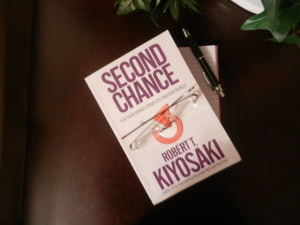 I’ve often spoken on my fears of a coming economic collapse for America. Conditions are ripe here for a collapse; they currently mimic the days and times of the Roaring Twenties, which preceded the Great Depression. Both consumer and government debt are at historic highs, the stock market is booming, and people are once again being carefree in their spending, scooping up new cars due to lower gas prices and making other short-term view financial decisions that will almost certainly create crisis in the long run. That’s always a recipe for trouble, my friends. When we create a “fun bubble” with our carefree spending, that bubble will eventually pop. Many people wave off my fears of another collapse, so it was, in an odd way, a bit of a relief to hear Robert talk in his Second Chance book about why he too is convinced that a serious economic collapse is on its way to America.

How the Second Chance Book Can Help You Prepare

The Second Chance book contains three parts; The Past, The Present and The Future. Each part contains highly informative and educational chapters about how money works in this world. I’ve studied quite a bit on personal finance, but I was surprised while reading Second Chance to find out how little I really knew about the inner workings of the government, the monetary system and how it is (intentionally or not you’ll have to find out) truly set up to widen the gap between the rich and the poor.

Robert Kiyosaki presents some hard-to-hear truths about how we’ve been duped into believing that what we thought was good financial management is, in fact, exactly what’s putting us in danger of falling into the “poor” group instead of into the “rich” group. The book isn’t written in an alarmist kind of a way, but Kiyosaki is honest about sharing what we don’t know about money and how we can change that to protect ourselves and our families from the coming collapse.

As I finished the Second Chance book, I thought for a very long time about the lifetime of financial crises we’ve been through as a family, and I remembered again the day when Rick called me to tell me he’d been laid off, due in large part to the collapse of 2008. I remember the fear and dread I felt as I wondered how our then one-income, fiscally irresponsible family would eat and live.  Luckily, we survived that collapse, even if we did leave it with tens of thousands of dollars in credit card debt. Now, with the help of Robert Kiyosaki and Second Chance, we have the knowledge we need to put our family in a position of opportunity instead of danger when the next collapse comes. What a difference a book makes.

If you want to learn how to protect yourself and/or your family from a coming economic collapse, and learn how to use the coming economic collapse to strengthen your wealth instead of letting it diminish your wealth, order your own copy of Second Chance today by clicking on any of the links throughout this post. You’ll be forever thankful you took the time to read this amazing book.

Many, many thanks to the Richdad team for offering me the opportunity to read Second Chance, for sponsoring today’s post and for giving me the privilege of learning how my husband and I can work together to strengthen and increase our family’s finances as we prepare for the coming economic collapse.

Book Review: Rich as a King