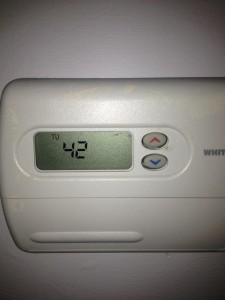 Hey, friends!  As promised, here is the cautionary tale on being prepared that I promised you in this week’s earlier post.  My dear friend, Shannon, from Financially Blonde, went through her own 10 days of trouble as they experience a long-term power outage after Hurricane Sandy.  Here, Shannon shares her experience, and some of the lessons she learned about the importance of preparedness.  Thank you so much, Shannon, for sharing your story!

I lived in Florida for five years, and during that time, we experienced some very active hurricane seasons. And I always remember the local news teams interviewing families who were “surprised” that they got hit by the hurricane and were not prepared for it. I would sit there in shock at their lack of preparedness especially after having lived through previous hurricanes and I vowed that I would not be one of them. We were fortunate in our years in Florida to never get hit by a hurricane despite a few near misses. The irony was that we moved back up to New York and had worse luck with hurricanes in New York than we did in Florida.

You don’t know what you got…

There is a great song by the 80s hair band, Cinderella, “You Don’t Know What You Got (Till It’s Gone)” where they obviously lament the loss of a loved one; however, the song also applies for our basic needs like electricity. We learned this in August of 2011, when Hurricane Irene impacted New York. At the time, we were living in an apartment and lost power for three days.

At first when the lights go out, you actually think that it is romantic and that you could use a break from being constantly plugged in. However, you quickly realize how much you rely on your phone for communication and information and without a source to recharge your phone, you will rapidly lose your connection to outside resources. Our apartment’s water heater and oven were also electric, which severely limited our personal care and meal options when they went out. During this period, we were in the process of looking for a home to buy, and the experience definitely impacted our decision making process for the home.

After the experience of losing power in the apartment, and knowing what could happen in Florida, we realized that there were a number of items we would need to make sure that our future home would be a good place of refuge should an emergency weather situation arise. Here were some things we looked for:

We were fortunate enough to find a home with all of these features and one year after finding this home, our preparedness was tested.

On October 28, 2012, Hurricane Sandy hit us, and while I definitely know that there were a number of people who struggled more than we did, we did not come out unscathed in the process. I live in a heavily wooded suburb of New York and while we did not have the flooding problems that many coastal areas suffered, we did have a number of downed trees that left us without power for a total of 10 days. Having learned from our previous power outage situation, we were definitely prepared for this situation. Here is how that home prep list paid off for us.

Don’t Miss Out on Learning Opportunities

Despite the fact that I felt as though we were very prepared for this event, we could have been better prepared. We were smart enough to have a generator and a supply of gas; however, we did not have enough gas to run the generator for more than a few days. My hubby was forced to have to find gas and that was not an easy task three days after the hurricane. In fact, there were gas lines like you heard about in the 70’s all over our county. Thanks to the app, gas buddy, he found a station almost 20 miles away; however, he had to wait in a very long line to refill our supply.

I also realized that while our homeowner’s insurance covered the basics, we did not have flood insurance. If you do not live in a flood zone, you won’t be required to have this, yet if your home gets hit by a hurricane, your insurance provider will likely say that it was flood that damaged your items and not wind. So, we have since added flood insurance to our home coverage. And the great news is that because we don’t live in a flood zone, it is not a big hit on our budget, but it did help us rest easier through this last hurricane season.

Use the past as a guide for the future

I think the most important part of prepping for emergencies is to understand that we are given lessons from the past and it is important for us to learn the lessons so that we are not taken off guard like all of those families in Florida that I would watch on the local news. It is not fun to have to live through natural disasters, but it is even worse when you are not prepared to handle them. Despite the fact that we were well prepared to go for 10 days without power, we still had a tremendous amount of stress and worry through the process. I am glad that it was not compounded by a lack of preparedness.

Did a natural disaster that impacted you or someone else, change your view on your preparedness? How would you fair without power for 10 days?

Prepping For Newbies: What You Should Focus On

Prepping 101: Be Prepared Not Merely to Survive, but to THRIVE