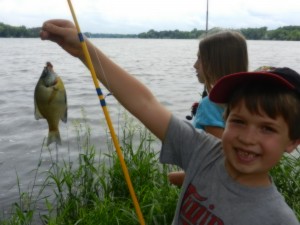 This story is about when it’s okay to break the rules, so fishing might not seem to fit, but bear with me.  I promise I’ll get to the point.

So, right near our house is this awesome fishing lake.  It’s one of those lakes where you just cast your line in and the fish fight over it.  Last time we took the kids there, we were pulling fish out 30 seconds after we put our lines in – every one of us – as evidence by this adorable pic of our son. 🙂

This lake runs along a county road that is fairly busy, and many people come and park their cars along the side of the county road and throw their lines in right off the shore.  This is dangerous, both for passers by and for those fishing, as it can be a surprise to come around the corner and see several cars parked on the shoulder with people wandering around as they get ready to fish/leave when they’re done.  There is other shoreline fishing available that is safer, and “legal”, but there’s not a lot of it, and it’s first come, first serve.

For this reason, the county put up a huge, bright orange construction fence along the shoreline where people fish along that busy road, along with several signs that make it very clear that there is “No fishing allowed”.

No matter, however.  People still park on the shoulder,  and walk around the fence and fish anyway.  This drives me crazy.  It drives me crazy first off because of the danger it poses (people even bring their young kids on this busy road to fish!), but secondly, it drives me crazy because, to me, it’s like the people are saying “I’m above the rules.”

Rick thinks it’s no big deal, and can’t understand why I get my undies in such a bundle over this.  So, I thought I’d turn it over to our beloved readers.

What do you think?

Now, lest you think I think I’m perfect, I want to show you a time just this week when I kind of broke the rules.  At least, I think I broke the rules.  As part of our summer staycation budget, I took the kids to the movies this week with our BFFs.  The big kids had planned to see Maleficent, and we were taking the little kids to How to Train Your Dragon 2.  When we got to the theater and purchased our tickets, however, the other big kids approached Maddie and said “Hey, if you want to see Dragon instead, we’re okay with that.  What do you think we should see?”  The kids decided on Dragon, and I, in my probably-over-the-top rule following way, said, “Okay, let’s go and ask the employee if we can get tickets for that movie instead.”

“Why?”  the kids asked?  “We’re just switching theaters.  It’s not at all busy here, and we did pay for a ticket, so what difference does it make which movie we choose?”

“Oh yeah.”  I answered.  “I guess it really doesn’t matter since none of the movies are busy or sold out.  Okay, let’s go.”

You see, this is how rule-oriented I can get – so rule oriented where I can’t even see where at times it might be okay to break the rules.  Which in turn, leads back to my original question:

When is it okay to break the rules?

What do you think?  And is there any area in your life where you wonder if rule-breaking is okay, or if it’s not?  Things like eating grapes at the grocery store or taking home extra condiments from restaurants?

The Three Rules of Self-Sufficiency and Preparedness

A Holiday Break and Some Informative Articles

4 Ways to NOT Break the Bank this Halloween

How to Have an Awesome Family Spring Break on a Budget