Since we began this whole “frugality” thing in 2013, we continue to look for ways to DIY things we’d normally hire out for. Our biggest victory (possibly until now) was do-it-yourselfing our son’s speech therapy.

“S” couldn’t say his R’s – they came out sounding more like W’s. After just a few short lessons with a YouTube video from a certified speech therapist, he had it down!!

We were psyched. No driving from our country home to the city several times a week for speech therapy, and no spending hundreds (or thousands) of dollars for speech classes.

Why We Chose to DIY Our Child’s Senior Pictures

Choosing to take our daughter’s senior pictures wasn’t an easy choice. After all, we have little photography experience, and with senior pictures you obviously want high quality.

But after weighing the costs (a good photographer in our area charges between $500 and $1000 for the sitting alone) and considering that we have four kids who will need senior pictures, we decided to take chance a and try to learn to do it ourselves.

Now, know that if you choose to take your kid’s senior pictures you can expect to put in some work along with your money. If you have just one kid and don’t expect to be involved in photography going forward, you’ll probably be less stressed hiring the job out.

However, if you have more than one kid and happen to like photography, this could be a good option for you.

In our case, I really like photography and so does Rick, so the expensive camera we bought to do the job could be used going forward for a number of reasons: side hustling, taking future family pics, etc.

Knowing that we would certainly use the camera in the future was a big part of our decision, as was knowing we’d enjoy learning more about photography.

Now, here are the specific steps we took to prepare for our DIY senior picture session.

Buy a Great Camera and Lenses

This is imperative. You’re likely not going to get high quality pics, even with a higher end point-and-shoot model. In our case, we chose this Nikon model bundle:

We also purchased this lens in addition because our research indicated that non-zoom lenses (fixed lenses) tend to get sharper pics but we wanted an inexpensive one.

We chose this brand and model based on the advice of a friend who is a professional photographer, and so far we’ve been really happy with it.

A high quality camera is definitely a must if you are going to take your child’s senior pictures. Without it, don’t bother. A great camera has a higher ability to walk you through any lack of education about photography you might have too.

Today’s digital cameras can work together with inexperienced photographers for some great pictures.

Invest in an Education

The next step we took to prepare for DIYing our oldest’s senior pics was educating ourselves on how our camera worked and on how to take great pictures.

This instructional YouTube video by Tony & Chelsea Northrup was phenomenal at explaining how to operate our camera, even for newbies like us.

We’ve watched it once now and will definitely watch it again, and plan on getting his book as well.

As I’ve mentioned, education is vital to taking great pictures. The videos I watched and online articles I read taught me a lot about placement, background, etc.

Here are some other things you’ll need to know about do-it-yourselfing your child’s senior pictures.

Make Sure the Weather is Right

It’s funny – you would think a sunny day would be perfect for taking great pictures, but the truth is that overcast is best. Check out the difference between this “sunny” pic (the sun came out during one of our sessions) and the other overcast pics. 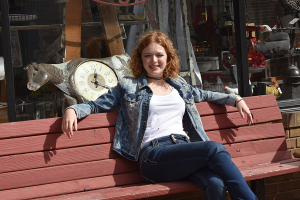 Choose a day that is cloudy but with a smaller chance of rain. Rain is not good for expensive camera equipment – or for girls with makeup. 🙂

Expect to Take LOTS of Pictures

Being newbies, we took over 300 pictures of Maddie in order to get the 30 or so that we’ll consider using for her senior picture portfolio.

We did two sessions – one in a quaint little town not far from here and one on our property. Each session took 2-3 hours. You’ll have LOTS of pics that are subpar and that is okay – just analyze what’s wrong with them and commit to not making the same mistake again.

Use Props That Are Important to the Subject

It can be fun in senior pic photography to add some props that mean something to the student. For instance you might want to take some pictures in their sports uniform if they play sports, or you may want to take some photos with a beloved pet. 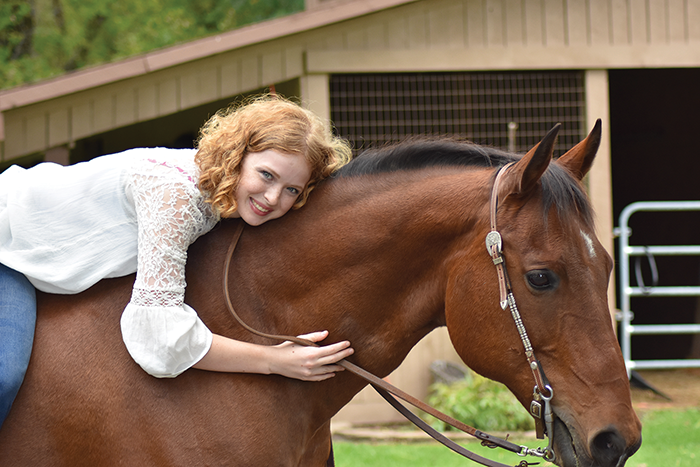 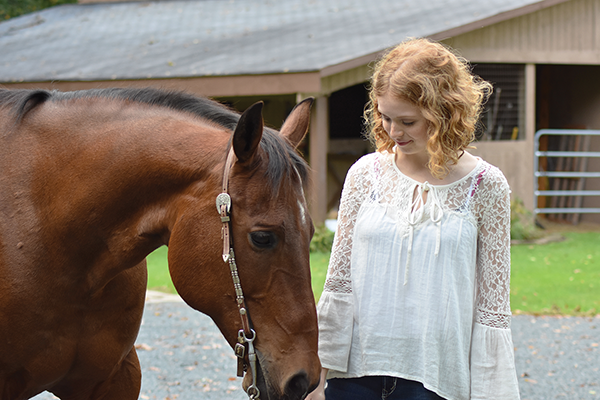 Don’t Be Afraid to Experiment

Some of the pictures we ended up liking the best were taken from seemingly cockamamie ideas we had about poses and backgrounds. Like this pic: 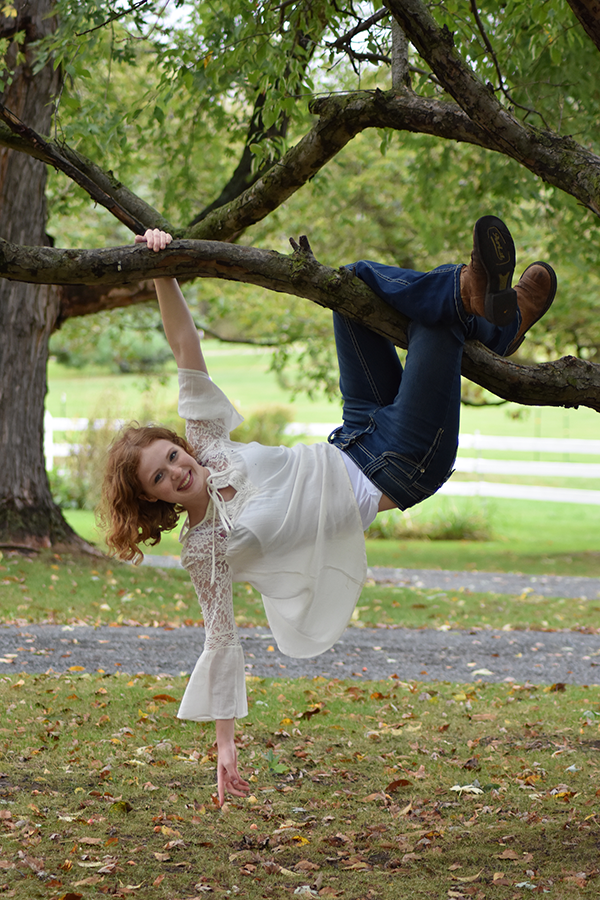 Go ahead and do some fun and different stuff and play around a bit. 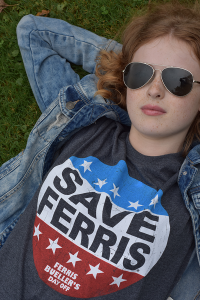 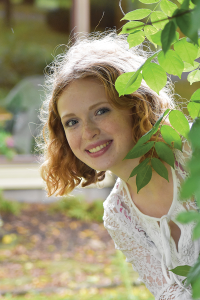 Know What is Considered Usable in the Photography World

As I mentioned above, we only used about ten percent of the pictures we took. The other all had issues such as:

Yep, we had several pics that were just too blurry to use. 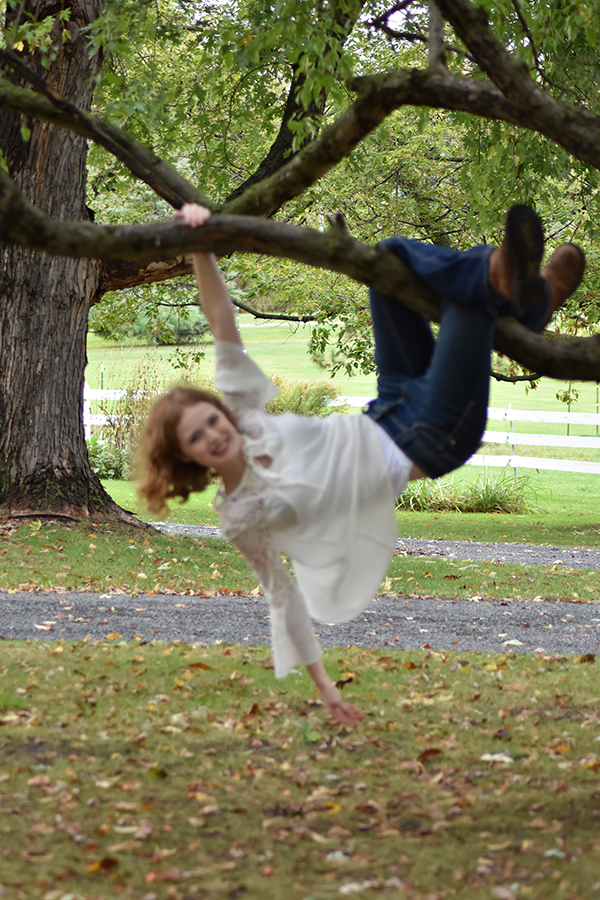 Placement is important in photography. Look at the difference between these two pics. Bluriness aside, see how the one pick is off centered a bit (which can be great at times but not here) and the bottom of Maddie’s arm is not visible?

Compare it to the other one in which she is more centered and you can see the whole Maddie. The first one is, well, annoying, because of placement. 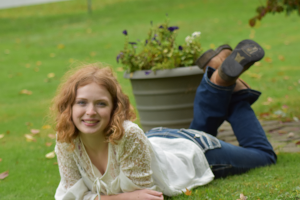 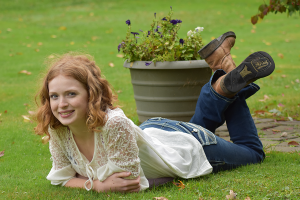 You’ll also likely find other random issues, such as we did with this shot. The pic on the left is okay but Maddie’s crazy curly hair was out of control, which you can see if you look at the background. The second shot has her hair a little toned down. 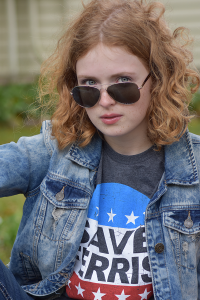 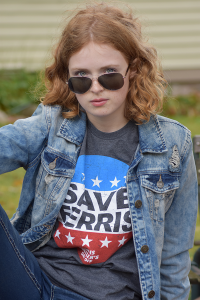 We almost had a major issue when I went back into the camera to take another look at the 300+ shots and found that our memory card had corrupted most ALL of the pics.

When I went to a local camera store to find out what the heck the problem was, the expert behind the counter told me that this will happen often if you move the memory card from one location (i.e. the camera) to another location (i.e. the computer) and then put it back to the first location.

There are other issues that can cause a memory card to corrupt photos too so it’s a good idea to get your pics on a hard drive (the only form of permanent storage) ASAP before something goes haywire.

Luckily, the day we took the pics Rick asked me to download them onto our PC right away so he could see them better (yeah, we’re gettin’ old). If he hadn’t, we might have lost them all.

After you move your photos to a hard drive, you can clear out the memory card after you put it back into the camera. Apparently this is a must-do step too.

We bought one similar to this one suggested by the expert at our camera store.

Printing Out Your Pictures

When you’ve decided which pics you want to print out, send, etc., it’s important to get them printed out at a higher quality printer. We haven’t decided who we’ll use yet, but it won’t be our local big box store photo center.

We’ll likely print them out at the camera store. We’ve also had several friends have good luck with Shutterfly and Tiny Prints.

The goal is to pick a high quality printer that has the care and equipment to print stellar copies of your hard work.

I’m telling you, if we can take pics this good so can you. Don’t be afraid to try and DIY your child’s senior pics. You might end up being pleasantly surprised at the results.

Save Money and Pay Off Debt Faster with a Personal Loan

10 Ways to Save Money at Home

How to Save Money: Frugal Alternatives to Cable TV