Happy Monday, friends!  Today I’m so excited to publish our first staff writer, our daughter Maddie!  You’ll see on the sidebar that our 13-year-old is already a published fiction author, and so it only made sense to get her hooked up into the PF blogging world (and help ingrain more PF responsibility into her 😉 )and have her start writing for us.  Maddie had a great money-saving experience a few weeks back, and wanted to share it with ya’ll.

Admit it:  If you’ve ever leased or owned a horse, you know it well… those things are expensive. Even if you don’t count the necessities, like the feed and bedding, horses are still what seems to be an endless supply of expenses to keep them.  No matter if you’re boarding your horse or keeping it at home, it’s a lot of cash.

So how do you save money when you’re trying to care for a half-ton beast? It’s not the easiest thing to do, but it can be done.

As an example: For the past few months, I’ve been eyeing a western riding saddle at the local farm store. It’s a nice, tan saddle, with a comfortable-looking seat and stirrup leathers that could easily customize to the rider and horse- a flexible build with fancy leather designs, a large seat and cantle and a soft cushion for the horse’s back. A perfect saddle for the type of riding I like to do. But it had one flaw. You guessed it: the price tag.

Five hundred, sixty bucks? As a teen, not something I have on hand. And there are some other things I’ve been wanting as well: a Sony Vegas and computer of my own – all high-priced beauties. All three added up? That comes to a good $1500. That price is a no-no, and I’m not talking the laser-shaving thingamajig that is advertised on the television.  Suffice to say, I needed to find a way to save money on at least one of those items.  I’m pretty good at saving money, but my savings account isn’t up quite that high – not yet at least. 🙂

Around 3 weeks ago, I found out that we were going to wander some garage sales out here, something that we don’t get to do often in redneck country.  One was supposed to have tack. I was a bit reluctant to go; honestly, I hate leaving the farm. But, of course, I ended up dragging my lazy tail into the truck, and off we went.

The first garage sale we hit sported the tack; bridles, whips, brushes, and a couple of saddles.  A gorgeous English saddle looked to be in just fantastic shape, but I already own a really good English saddle, so that wasn’t much of a help.  A little ways off, I spotted a large Western saddle – exactly what I’d been looking for. But it was dusty, dull, pretty worn, the leather was stiff, and it was old. Not exactly the pretty saddle that was sitting brand-new on the farm store shelves.  But, I had mused over the thought of getting a used saddle a bit. I did have some brand-new saddle soap at home, plenty of rags and time. It wouldn’t hurt to get out the elbow grease and the standing saddle rack, in order to save a bit of cash.

I asked the price- seventy bucks. Quick a shocking difference, compared to the $560 price tag on the new saddle.  Not an easy choice, considering I would have to polish the saddle to shine, get a new pad, and the worst part:  break in the old leather.  Doesn’t sound very bad until you actually experience it.  Let me just say it’s very painful for your joints. But there was a bright side:  I was saving on my horse expenses over five hundred dollars after you add in tax, but I would have the new, bigger saddle I needed.

So out of the bank came the cash and into the car went the saddle. I took it home and polished the dullness right out of it. I got a pretty nice shine, and it actually turned out to be a pretty beautiful saddle. 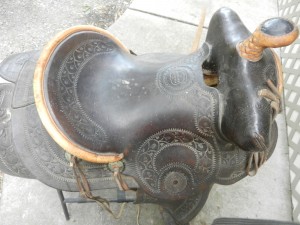 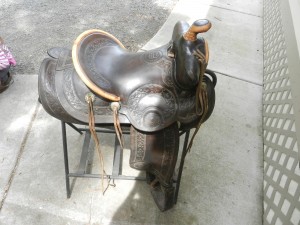 Whaddya think?  Looks pretty good all cleaned up, doesn’t it!  I finally got it onto my horse and up in it (three days after a surgery… Call me Einstein…). It turned out to be a pretty good ride, but it really did need breaking in.

Since then, I’ve been riding once or twice more. I’m pretty glad that I got this one- I’ve learned that this saddle is built with a higher quality compared to my old one, and because of that, I’m able to have a smoother ride when Star and I let loose on the trails. Yea!

So, in a nutshell, I think I got a pretty good deal. And I saved over 500 bucks! Booyah!

Author bio: Maddie is a true country girl at heart.  Much more comfortable in jeans and boots than in a dress, Maddie is a pro at the things country girls like to do: archery, target practice with the 22, and of course, riding horses.  She’s also pretty darn good at drawing and video production, which she does for fun on YouTube and Deviant Art.  Maddie can throw bales of hay around like nobody’s business, and she’s also a huge animal lover who aspires to own her own ranch someday, which her dad is quite certain will contain no less than 3,284 cats, dogs, horses and other fun animals. 🙂

How Single Moms Can Save Money This Winter

More Ways to Save Money on Groceries

How to Save Money by Planning Ahead