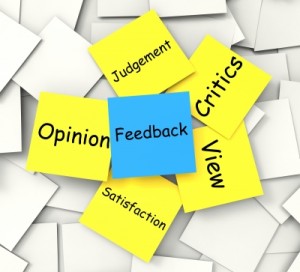 Whether in money or in any other area of life, the one constant seems to be criticism, and so learning how to deal with criticism is, I find, a crucial factor to a joyful life.

When we started this blog, I knew that, to some extent, we’d be opening ourselves up to criticism.  We feel blessed that 99% of the people who comment on this blog are supportive and work to leave us constructive criticism, but as I’ve learned from many of the wonderful bloggers out there – and experienced myself – there’s always that 1% whose goal, it seems, is to tear you into little pieces with their nasty, negative jabs.   And it’s funny how that small percent of “Negative Nellies” can have such a big impact on one’s psyche.

When we first started blogging, the nasty criticisms would really get to me.  I’d spend days beating myself up for what some random person said about what an idiot/liar/dummy/loser I was.

I’d wonder “Are they right?  Am I really that bad?”

Some angry person would start the verbal abuse, and then I’d continue it, all on my own, until I learned to buck up and snap out of it.  After a year and a half of letting verbal bullies push me around, I’ve learned a thing or two about criticism, and thought I’d share these thoughts with you today.

Learn to Know the Difference Between “Good” Criticism and “Bad” Criticism

Not all criticism is bad.  In fact, most of the criticism we’ve received on the site here truly has been intended to help us along.  People want to make sure we’re seeing our money management from an objective perspective.  Thank you for that, my friends.

When dealing with criticism in your own life, as you start to analyze it, you’ll likely find two groups of critics: the helpful critic, and the bitter critic.

The Helpful Critic will gently, yet honestly, bring up a pattern or habit in your life that may (or may not) be hindering you in some way.

The Bitter Critic will, on the other hand, use hurtful, mean words and tones in an attempt to “cut you down to size”.

It’s crucial when learning to deal with criticism that you learn the difference between these two types of critics, because they need to be handled in two different ways.

With advice from a Helpful Critic, it’s important to step back and analyze that advice or criticism objectively.  Is the criticism valid?  Is there something that you can learn from it or change that will make your life better?

With advice from a Bitter Critic, however, it’s important to do that same analysis.  In spite of the poor choice of words or the mean tone, you can truly use the words of the Bitter Critic to help propel you to a better life if you keep the focus on the message instead of the way it was presented.

But this is where the similarities end, because, more than anything, it’s vital that you choose to stand solid and not let the negative, mean, or irrelevant words of any critic get you down.  How?

1.  Remind yourself that no one’s opinion of you really matters other than your own and the opinions of those closest to you.  If we try to please everyone, we won’t please anyone.

2.  Acknowledge the fact that the words of a Bitter Critic really arise out of a hurting heart.  Angry, mean words come from hurt, angry people, and they’re likely not hurt or angry at anything you’ve done, especially if it’s a random person that you don’t necessarily have a relationship with.  Work to view the Bitter Critic with a heart of pity and sadness for them, instead of focusing on what they’ve said to you.

3.  Overcome the criticism with positive self-talk.  This may sound corny, but it really works.  When Bitter Critics hit us on the blog, we remind ourselves of what we have done and how far we’ve come.  We pat ourselves on the back for even beginning the journey out of debt in the first place, and for all of the cuts we’ve made in our budget.  We also remind ourselves that our value-based spending may not jive with someone else’s view of value-based spending, and that’s okay, because the whole point of value-based spending is that you make your purchases based on what YOU value most, not based on what someone else thinks you should value most.

Learning positive ways about how to deal with criticism is so important in today’s world, where we have access to share our thoughts and opinions – negative or positive – with millions of people.

Choose today to handle the criticism that comes your way in a format that will lift you up and onward toward your goals.

How do you handle criticism?  Which tools for handling criticism have you found most effective?

Your Debt Payoff Journey; Blazing Your Own Trail

How to Deal with Rejection

How to Deal With Debt Fatigue

Emotions and Food: How to Deal