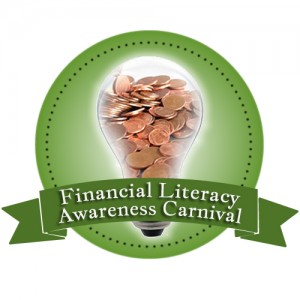 Once again, in honor of Financial Literacy Month, we’ve teamed up with our good friend Shannon from over at The Heavy Purse, and a long list of others who are committed to promoting financial literacy to all of the world.  You can see last year’s post here.  Our topic for this year, Our A-ha Money Moment, begins in November of 2012.  Here’s the background:

Our story of how we “woke up” to financial literacy started, really, with Rick’s job layoff.  In spite of poor money decisions scattered throughout our marriage, we were debt free when Rick got laid off from his job in February of 2010, save for our mortgage.  At the time, we didn’t really worry much about money, and sailed through the layoff pretty painlessly, between severance pay, savings, etc.  The real trouble started when Rick got his new job seven months later.

The job he got was at a great company, however, they were only willing to start him out at 80% of his previous pay.  We knew that, since we were living paycheck to paycheck, that this would hurt, but instead of figuring out how to cut costs, we assumed we were living “frugally enough” and decided that we “had no choice” but to put the remainder of our monthly expenses on credit cards until Rick worked his way up to his former hourly wage.  Man, what a dumb decision that was!  Two years later we were dealing with a whole boatload of credit card debt.  We then made a move that, although financially wasn’t a great move, it really did change our financial lives for the better.  We bought a different home and, in the process, added more debt.

But something changed after that move.  Our former home was in an affluent suburb where keeping up with the Joneses was normal and expected.  Our new home was out in the country, far away from the influences of others.  Suddenly, we were able to see the rat race for what it truly was.  It was as if we lived on the outside, looking in at all of the chaos involved with the keeping up with the Joneses lifestyle.  We could see the uselessness of it all, the stress of it all, the silliness of it all, and we learned that it really, truly doesn’t matter how much stuff you have or what kind of stuff you have.  That it really, truly doesn’t matter what ANYONE thinks of you, aside from yourself and your God.  At that moment, we stopped caring about the opinions of others, no matter how close to us they were.

We figured out that the financial security of our family, since money affects lives on so many levels, was much more important than what people thought of us, because our financial security (or insecurity) was what would enable us to feed or not feed our children, to provide them with a home, or not be able to provide them with a home.  So in November of 2012, we made a decision; a decision that we would begin our journey to debt freedom.

We sat down, and made the frightful list of whom we owed and how much we owed them, what interest rate we were paying, the monthly payment, etc.  We also went back through the year of 2012 and tallied up what we’d spent on areas like gas, groceries and entertainment.  That was a tough week.  We came to the realization real quick that, although we thought we were being somewhat frugal (and we likely were being more frugal than many people) that we were wasting a whole lot of money.

And we realized that the only way that we were going to get ourselves out of the hole we’d dug was to hunker down and frugal it up, big time.  Was this an easy decision?  Yes, and no.  Yes, because we were desperate for financial freedom.  No, because we knew that this journey would take a lot of work and a lot of sacrifice.

We began our journey on January 1, 2013, and are now 15 months in.  It’s been a journey of many ups and downs.  There’ve been unexpected expenses, huge heating bills and emotional breakdown days.  But, we are getting out of debt.  Slower than we’d like, but we’re getting there, and that’s what matters.

My dear, dear friends, I plead with you today, if you are struggling with debt, give yourself the gift of starting – and staying – on a road to debt freedom.  The peace that you will achieve will bring you more satisfaction than anything you could ever buy.  When you get to that place when you no longer have to make decisions about life based on paying the bills, it will give you a great feeling of freedom.

I hope that by sharing this story, we have inspired and motivated those of you still simply pondering going on a journey to debt freedom.  Start today, and see what joy it brings you.

Also, head on over to Shannon’s blog for links to a whole list of other inspiring stories.  Happy Financial Literacy Month, my friends!

Have you had your “a-ha” money moment yet?  Tell us about it.

How to Save Money: Check the Labels