So, remember at the beginning of the year, I had listed as one of our goals that we would not be nearly as slackerish this year on our veggie garden as we were last year?  Due to lots of major tasks we ended up doing last year: storm clean-up, staining the barn, and a boatload of wood chopping, the garden last year was sorely neglected.  Here’s how it looked by August or so. 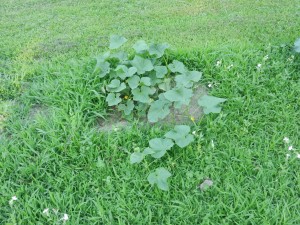 Why, yes, since you asked, I am embarrassed by that picture. 🙂  But even with our sore neglect, we managed to get a few things in the cellar and to freeze a few bags of veggies too.

This year, however, we’ve resolved to do things closer to the right way.  On Sunday, third daughter and I planted 76 little pots of seeds that we hope and pray will turn into a bountiful array of veggies. 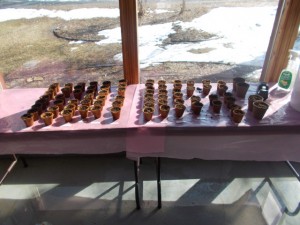 Some of our pickins’ ?

2 kinds of cucumbers, 4 kinds of tomatoes

3 or 4 varieties of lettuce

We’re really working hard this year on tending well to our “garden”, making sure to water the seedlings daily.  As of yesterday, the snow is gone and we can actually SEE our garden – WOOHOO!  So far, our hard work is paying off, as some little baby lettuces popped up a mere three days after we planted the seeds: 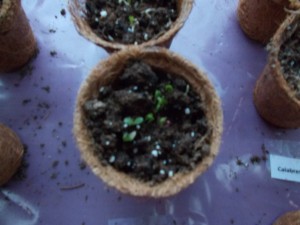 As I’ve mentioned in previous posts, we’ve always had a small garden, but really are not very educated at all in working a large garden meant to provide a year’s worth of food for a family of six .  But our goal this year is to provide enough organic, non-GMO veggies to feed our family for an entire year.  We’ll see how it goes. 🙂

Are you putting in a veggie garden this year?  If so, how’s it going?  If not, how come?