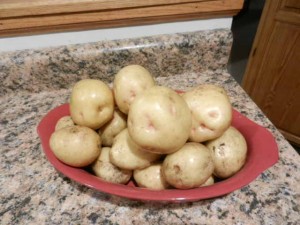 We did it!!!  We planted potatoes this year for the first time, and actually got a small harvest!!!  Now, it wasn’t the harvest I was hoping for, but aren’t they beautiful?  Growing potatoes was odd.  Unlike most other plants, you know they’re ready for harvest time by waiting for the plants to die.  When the plants are dead, it’s time to start digging up the harvest.  According to what I’ve read, one potato plant produces between 1 and 5 pounds of potatoes.  So far, of the seven plants I’ve dug up (we planted 10), all seven have only harvested roughly 1 pound of potatoes each.  Note to self: Quadruple the amount of potatoes you plant for 2015.

Green beans, on the other hand, are multiplying like rabbits!!  We eat a lot of green beans, so that’s good.  We’ve already got a half a dozen bags or so in the freezer, and I’ve got a good four more bags’ worth waiting to be blanched and frozen today.

Carrots are also looking good and we will likely be digging them up within the next week.  Despite four attempts, not one of our onions ever came up.  Next year we’ll plant plants instead of seeds.  We did that last year and it worked out very well.

Green peppers have been a sore disappointment.  Despite planting 4 plants, we’ve only pulled off three or four peppers.  Not sure if something’s been eating the flowers or what.  Jalapenos and Habaneros, on the other hand, have done well.

Tomatoes are doing well despite a very late start due to heavy spring rains.  If we can push off cold weather till late October or early November, we’ll have a nice tomato harvest.

Lettuce did very well and continues to do well.  We’ve only had to buy lettuce once this summer.

Zucchini was another winner, but our cucumber crop has been very disappointing.  I got four jars of refrigerator pickles done yesterday, but that’s it so far.  Hoping to get a dozen or so done for the cellar, but that remains to be seen. Problem is that the plants are producing only sporadic cukes.  We’ve had a decent amount of rain this week, followed by a good six weeks of super dry weather, so I’m hoping that’ll help. 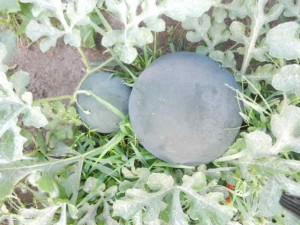 The watermelon and pumpkin plants are kicking it big time!  We’ve got half a dozen watermelons and at closer to a dozen pumpkins, so we’ll see how they turn out.

In other news, you may have noticed I didn’t do a July Debt Payoff recap.  Truth be told, this summer has sucked for us in terms of the debt payoff journey.  We had three major appliances die on us in July, and 90% of the cost had to go back on the credit card.  We got great deals on the replacement items, but it still sucked.  Also, I got a couple of comments this summer that were downright nasty and discouraging.  I’m not talking “constructive criticism” here, I’m talking comments that were blatantly intended to be downright mean.

I didn’t share it with Rick and won’t share it with him (luckily, my husband has no interest in reading my work here 🙂 ), because I didn’t want to share the “wealth”, so to speak, as far as discouragement goes, but I spent several weeks seriously contemplating quitting blogging altogether, and wondering if we really should give up our goal of debt freedom.  However, for the sake of all of the other families out there who need encouragement in homesteading and getting out of debt, and because I’ve fallen so in love with those who support this blog and our journey to be self-sufficient and debt free, I’ll keep on.

And in order to protect my psyche until I can grow a thicker skin, we’ll be giving out a little less info regarding our debt payoff each month.  I’m not trying to avoid transparency here, but those who have been on or are on a debt payoff journey know the fragility of the emotions involved on a journey of this sort, and I can’t take the chance right now of giving up because I let some bitter person’s nasty words tempt me to quit our journey.  This is my problem, I realize this, so I’ve got to deal with it in the way that’s best for me and my family.   As I’ve said so many times before, the most important thing about one’s debt payoff journey is that their plan allows them to stick with it through to the end.  And so I will follow that advice in order to protect my mind and my emotions so that we can stay on this journey.

I share this with ya’ll to remind you of the importance of knowing how quickly your emotions can sabotage a journey to debt free, and to encourage you not to let your emotions control the game.  It’s difficult, but with a lot of work, it can be done.

Thank you, my friends, for your support, honesty and love as we work our way out of debt and into a self-sufficient lifestyle.  You are The Best!!!