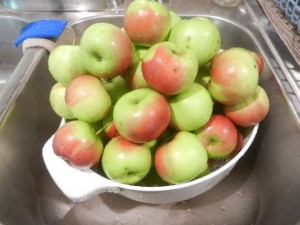 Even on a small hobby farm such as ours, harvest time means crazy time.  We spend lots and lots of time picking and preserving the fruits and veggies we’ve grown, cleaning up the garden to get it ready for next year, and preparing for the cold winters our northern state experiences.  It’ll be two years on October 1st since we moved from the suburbs to our hobby farm.  The first year was wrought with the busyness of unpacking, painting and the like.  The second year (our first harvest year) was absolute insanity.  We had no idea what we were in for: we simply planted our large garden and waited for the beautiful bounty, not having any idea how much work it was to freeze and can more than a few jars of pickles.  I seriously thought I might lose it that year.

Well, I can say in our second harvest season that at least we’re prepared.  The workload is bigger.  We are learning a bit more about how to preserve food, but are still largely newbies on that front.  But at least we have a clear understanding now that it’s a boatload of work.  We learned how to make and can spaghetti sauce this year, and did 7 jars of that; our half after splitting with a friend who also shared in the work.  This last week we did 5 pans of apple crisp, several jars of tomato sauce (basically the spaghetti sauce without the spices and with the addition of a T. of lemon juice per qt.) and several jars of salsa.  Last year’s salsa was good (I went off the recipe in the Ball Canning and Preserving Book) but this year we made our own recipe and it turned out FANTASTIC.  The addition of Chipotle Chili Pepper did the trick, as did more Cumin.  I’ll be sharing the recipe this week.  The new salsa has a nice bite, but not so much that it’s inedible for kids and others who can’t handle a lot of spice.  You’ll definitely need a glass of water or pop nearby, but the flavor is fantastic.

This year our 4 apple trees produced an abundance of fruit.  We did the 5 pans of apple crisp with BFF (she took two and I took two, and we cooked the other up immediately for our incredibly patient and helpful kids).  But after that, our trees were still plenty full of fresh and delicious apples.

We had frost on Friday night, so I wanted to make sure we got all of the apples down Friday evening, just in case.  My dear BFF let us haul her two oldest boys back here to help our kids, and the six of them cleared out all four trees in an hour – I kid you not.  They were amazing, and we sent home a large box of the very best apple with the boys for their efforts.

What’s left is, I’m guessing, a good 60 pounds of apples for us to preserve.  O M G.  This will be interesting.  Our plan is to make apple butter, some apple sauce, and to peel, core and slice the rest, freezing them in Food Saver Vac bags so they’re ready to use for apple pies and apple crisp during the year.

We also had another huge blessing: some dear friends who have more veggies than they could possibly use invited us over to take a good twenty pounds of potatoes, 10 pounds of carrots, and some other goodies as well.

The whole family worked yesterday morning to peel, chop, blanch and freeze the carrots (we did some sliced for soups, and some we left in big chunks for roasts and to serve with meals).  This doesn’t even include the carrots we have yet to harvest from our garden.  That should net us at least another 10 pounds.  We’ve got several bags of green beans in the freezer, and I’m hoping to make another batch of salsa with what tomatoes we’ve got left.

We feel so very blessed to have all of this food in the pantry at a fraction of what it would have cost to buy it outright, but man, the workload is intense this time of the year.  Along with homeschooling, harvest time leaves me very little time to do much of anything else.  So if I’m not around comment as much as normal, please forgive me and know that I will get back on track after all of this food is put away.

I guess what I’m trying to say is that although homesteading is a lot of work, we feel it’s worth the effort.  Not only are we learning to grow and preserve our own food, which lessens our dependence on the grocery stores, we are saving money and we are becoming more self-sufficient.

If you’re looking for more information on homesteading, you can click on our “learn more” tab at the top of the page, and from there click on the “Homesteading” section.

Have a happy autumn day!