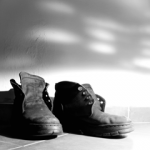 A Yahoo Finance article says “no”, citing reasons such as the inability to find affordable housing, transportation to a job, and a decent grocery store.  I obviously can’t speak for every city or every situation, but I’d like to delve a little bit further into my own childhood situation and how my own mother bootstrapped herself out of poverty. And then, I want your opinion: Was my mom’s situation different?  Did she have benefits or opportunities that people living in poverty don’t have today?

Okay, on to the story

It was January of 1978.  I was 11, my brother was 8, and my other brother was just 2 years old. My parents had separated in hopes of “taking a break” from a rocky marriage, and as so often happens, that separation soon led to divorce.  No one person was at fault; both my parents admit they made a lot of mistakes and thought that being apart would be better.  The judge granted my mom $300 a month in child support, which my dad faithfully paid while supporting himself.  The problem?  The house payment was $250 and mom had zero marketable skills.  She’d been a stay-at-home mom since the day she gave birth to me in 1967.  Mom didn’t even have her drivers’ license at the time, and had no college education.

Mom went on welfare, realizing she couldn’t take care of three kids and herself on $300 a month.  We utilized food stamps for groceries.  With no car, we walked the mile to the grocery store for groceries every two weeks, and pulled them back in a little red wagon.  In the winter time when the wagon wasn’t practical on unshoveled walks, we would walk down to the grocery store and take a cab back, or occasionally get a ride from a friend.

As the months wore on, mom realized that welfare was not the optimum earning situation, so she brushed up on her typing skills (we had bought a very old, used typewriter at a garage sale), took a bus down to a temp agency in hopes of finding work.  By the end of 1978 she landed her first job as a factory worker.  She took the bus there and back, or carpooled with co-workers.  Six months later she quit due to severe depression that had set in.  We were back on welfare.  A year later, in the spring of 1980, mom again picked herself, knowing that she had to do better.  By summer of 1980 she obtained her drivers’ license, and set about to job hunting again.  She got a free piece of crap car from a guy, and then when that died a couple of months later, she made payments on a $200 piece of crap car she bought from a friend.  She drove the POC until a few years later when she built up a credit score and qualified for a car loan on a more reliable, yet still cheap, car.  She would search the paper, call the temp agencies, or take advantage of the employment opportunities the welfare system had privy to.  I might add that the state is MUCH better today at helping the unemployed find work than they were in 1980, but they did manage to find a few things for her.  In the fall of 1980 she got a job as a receptionist.  She worked there for six months before slow business forced them to lay off her co-worker, doubling her work load while at the same time they cut her hours.  She quit that job in 1981 because she couldn’t handle the stress level and again was home and on welfare for several months.  Eventually, after several more attempts and failures at work, she landed a job at an insurance provider, a small-time company, processing claims.  This job led to more, and better as she again dealt with layoffs, etc.

My older younger ( 🙂 ) brother and I were in school, so she had to find child care for my baby brother at the time.  She scoured the neighborhood and checked with local schools for leads on daycare providers that were cheap, and she found them.  This wasn’t easy or fun work, but she did it. I remember picking my baby brother up from daycare after school, and we’d all go home to an empty house while mom worked.

The other thing that contributed to my mom’s success was that us kids were made to take up the slack at home on house-cleaning and cooking, like it or not.  I became the mom, while my mom worked to feed our family.  Again, this wasn’t fun, but we all did what we needed to do, and we got our comeuppance in discipline if we didn’t.  Rarely did we complain because we were glad to not have empty cupboards and not have to worry about the electricity being cut off, both common occurrences when we were on welfare.

My mom, due to a childhood illness that affected her brain, doesn’t have learning come easily to her.  She has to work hard to learn new things, and employers didn’t often have patience with her because of this.  She’s also definitely a Type B personality.  Both of these “hurdles” worked against her as she learned how to become an employee again, but she kept on.  Mom never earned a lot, but she managed what she made well, after she learned how to manage money.  She retired in 2007 at age 62, with a small retirement account and no debt.  Today she still lives retired on her very small budget, but she makes it work.  She is remarried (she remarried after us kids were grown), but her finances and her husband’s finances are staunchly separate.  This isn’t to say he wouldn’t help her out if she needed it, but she’s still very much responsible for her own financial well-being.

My mom overcame lots of hurdles to get off of welfare and out of poverty, and none of those hurdles were easy to conquer, but she did what she knew she had to do.   It wasn’t easy, but it was worth it.  Today, having dealt with unemployment when Rick was laid off in 2010, we found that there were LOTS of resources to help get out of poverty: the library and the unemployment office have Internet access, there are classes on budgeting your money, finding a job, they’ll help you write a resume’, and everything.  Things that my mom didn’t have much of in 1978, yet, she managed, through determination and hard work, to find jobs and earn money.  Looking back to when Rick was unemployed, I can honestly say that our biggest hurdle was our own mismanagement of our money.  That is what got us into the debt mess we’re in today.  We lived in denial about our money situation and stubbornly decided that we deserved to have the things we wanted and needed, instead of working to live within our means at the time.  My point is that the unemployment didn’t cause our money problems; our own financial irresponsibility did.

So, what do you think?  Did my mom have special advantages that made it easier for her to find work, manage her money properly (eventually) and get out of poverty?

How to Help Others When You’re on a Tight Budget

The Dangers of Short-Sighted Vision

Gee, Can I Please Walk Over a Bed of Hot Burning Coals?