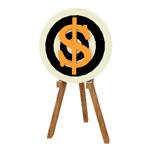 Hey, friends!!  Being we’re heading into the fifth month of the year already, I thought we should do an update on our 2014 goals and how we’re doing with them.   This is mostly to gain accountability for us, and to encourage others working toward their own goals.  If you read our original 2014 goals post, you might remember that we had both financial goals and homesteading goals.    Here, I’ll go about listing them, and updating everyone on how we’re progressing with them so far.

2. Reduce our Entertainment Costs from $74 a month to $60 a month.  Pass. We’ve been spending under $60 a month, mostly, but March was a (planned) spendy month for entertainment, so that brought our average up.  Due to a super frugal entertainment month in April, however, our average for the year now sits at $60.64.  Yay!

Energy costs are a different story.  The never-ending Polar Vortex hit us HARD during the first quarter of 2014.  So far on heating and energy costs we’ve spent $3122.  No, that’s not a typo.  Between propane fills (at jacked up prices) and higher electric heat costs to try and minimize inflated propane purchases, this is what we spent for the first four months of 2014 on energy costs.  The wood-burning stove install this coming summer should help lots with that issue going forward.

1.  Grow and preserve much more food than last year.  Pass.  So far we’re well on our way, effectively tripling the size of last year’s garden, provided everything continues to go well.  Most of the plants are coming up nicely, and those that don’t we’ll pick up new ones at the greenhouse.

2.  Consume less energy than last year.  Fail.  See above.  So far this year, not so good.  But we are continuing to work on things such as getting the wood stove installed, etc., as we continue to work toward this goal.

3.  Work toward more off-the-grid living.  Pass/Fail. Aside from installing the wood-burning stove for heating purposes and working on chopping and stacking more wood, we haven’t gotten very far in terms of educating ourselves in this area.  We will continue to work on this goal.

To summarize, I’d say that we’re moving forward toward completing our goals, but not as quickly as we’d like to be.  However, side hustle income is increasing, and expenses are expected to decrease as we hit warmer weather and get into growing season.  We should be able to start canning some jellies and jams as early as June, so we’ll update you on those tasks as soon as they’re ready to be completed.

How are your 2014 goals coming along?